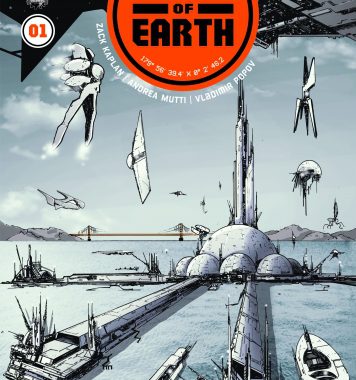 What if Earth finally made contact with an alien race, and was turned into a glorified truck stop? That’s the premise of Point of Earth, the new Image series from Zack Kaplan and Andrea Mutti. An interesting mix of District 9 and cop dramas like Edge of Watch, Port of Earth has a great set up and hook, but the second half falls a little short of it’s potential.

Years ago, Earth made contact with a group of aliens called The Consortium. This group of aliens served as a coalition for different races that explored our galaxy. Since their technology is completely fueled by water, they strike a deal with Earth to use our world as a port in exchange for their technology. Once the port is built, things go pretty smoothly, until a rogue group of aliens makes it past the port’s barriers and begin attacking humans. Realizing in the aftermath that the Consortium is less like the United Nations of aliens and more like a major corporation that only cares about profits, the people of Earth decide to create their own police force to make sure no one goes into, or comes out of, the port again.

Usually I groan when the debut issue of an Image series does a huge info dump, but with Port of Earth it’s actually the best part of the issue. Zack Kaplan’s script is served best in this documentary style, and the history of the port is really interesting. Hell, it probably should’ve been the actual focus of the story, because once Kaplan switches gears to follow around a few members of the port’s police force, the book suddenly loses all momentum. Sure, having drones follow these two officers around is a cool “on the ground” way to present Port of Earth’s story, but after a promising first half, it brings the book to an almost screeching halt. Since Port of Earth is Kaplan’s second comic series, it stands to reason that he’s probably just working out the kinks in this story, which I hope ends up being the case because the premise of this series is really good.

While Kaplan may be a new name in the industry, Andrea Mutti certainly isn’t. After working with almost every major publisher, Mutti’s getting into the Image game with Port of Earth¸ and he’s got a great handle on this material. Like Kaplan, Mutti’s art is at it’s best in the earlier half of the book, simply because there’s more interesting stuff happening in the script for him to draw. But that doesn’t mean that Mutti’s art suddenly drops off after that. In fact, it’s actually still really great, but like in Kaplan’s script, you might find yourself feeling like the book has suddenly doubled in length.

While Port of Earth’s debut issue isn’t quite as strong as I’d have liked it to be, I do think this will be a series to keep an eye on. The documentary style is an interesting way to narrate the series, and the main hook is pretty solid. Here’s hoping that Kaplan and Mutti can improve on what they’ve set up in this first issue. If they do that, then we may have another Image hit series on our hands.