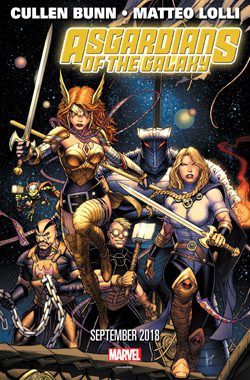 It’s a little strange that Marvel is putting out a title called Asgardians of the Galaxy after the release of Thor: Ragnarok, seeing as how the internet gave that nickname to the third Thor film. But here we are, with a new series that’s….supposed to replace Guardians of the Galaxy? Serve as a tie-in to Thor? I’m not entirely sure, but the opening issue from Cullen Bunn and artist Matteo Lolli is pretty fun, if a weird addition to Marvel’s publishing slate.

Annabelle Riggs, aka Valkyrie, is called into battle by Angela to prevent the latest version of Ragnarok, also known as the Asgardian version of the Apocalypse. Joining a makeshift team of other Asgardians like Skurge The Executioner, Thunderstrike, and even the Frog Thor Throg, the new group of heroes are quickly thrust into battle against the one enemy they never expected: Nebula. Looking to start Ragnarok again for her own means, she’s assembling the old, forgotten bodies of gods of Ragnaroks past to start a new war, and the only beings who stand to stop her are the ragtag group of Asgardians who are secretly lead by the last person you’d expect…

…No I’m not saying who it is, but the reveal is a little strange, and while I’m sure Cullen Bunn will offer an explanation in future issues, it really is a headscratcher when you consider Asgardians‘ place in the regular Marvel continuity. That being said though, Bunn’s script is pretty fun, and he does a great job of introducing you to these characters in a concise way that doesn’t feel like an info dump. This is a team of misfits and losers, but Bunn has a lot of fun having them bounce off of one another, and to be honest, I feel like Bunn might be onto something with this team.

Matteo Lolli’s artwork is pretty much perfect for this type of book. Asgardians of the Galaxy jumps around to many different locales throughout this opening issue, but at no point does Lolli struggle to depict what’s in Bunn’s script. From the out-there settings to the variety of aliens and human characters, Lolli not only handles the art with ease, but he also has set the expectation that his art will only get better as the issues go on.

While I’m still not entirely sure of Asgardians of the Galaxy‘s place in the Marvel publishing wing, I have to admit that I had a lot of fun with this series. If done right, this could be Marvel’s next Guardians of the Galaxy or Superior Foes of Spider-Man, as it has a nice mix of grand, superhero action, and like-able characters that haven’t made a connection in other series. Here’s hoping Beta Ray Bill makes an appearance soon.