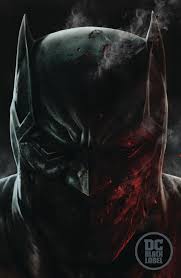 DC’s put a lot of hype behind their new “Black Label” imprint, which allows some of the best creatives at the company full creative freedom behind their vast stable of characters. There’s books from Frank Miller, Kelly Sue DeConnick, and John Ridley coming our way, but the first up is Batman: Damned, from Brian Azzarello and Lee Bermejo. DC has a lot of expectations for this line of books, with the hope that this line will birth a new Watchmen or Dark Knight Returns. While it remains to be seen if Damned will reach those levels of popularity and acclaim, it’s definitely off to an intriguing, if strange, start.

The Joker is dead. After his body washes up on the shores of the Gotham River, the city is in state of relief and shock. But no one is more shocked than the Batman, who was on top of the bridge above the river, but has no recollection of what occurred up there. After being visited by John Constantine and Deadman, the Dark Knight begins his search into what happened to the Joker’s missing body, if the Clown Prince of Crime is truly dead….and if Batman is the one who killed him.

Brian Azzarello is no stranger to the world of Batman, but his track record with the character has been….spotty lately. While his comic work on the Dark Knight has been pretty good, he was credited as the writer of The Killing Joke animated feature, which not only featured one of the worst Batman stories in it’s opening sequences, but also had the extremely bad idea of having Batman and Batgirl engage in a “romantic moment” on top of a building. While there’s nothing that bad in this opening issue, there is a rather controversial possible development revolving around Thomas Wayne that’s sure to ruffle a lot of Batfans’ feathers. As for me, we still have two more installments in this story, so I’m willing to wait it out to see if what Azzarello is suggesting actually pans out. Outside of that moment, Azzarello’s mystery is pretty interesting, and for being a “Mature Readers” imprint I was surprised at his restraint when it came to making this feel more “adult”. It’s a little more violent than usual, and there’s some unexpected nudity halfway through the book, but all in all, there’s not a lot in this that would make you think it was part of an “extreme” imprint.

Lee Bermejo is a longtime collaborator with Azzarello, working with him on titles like Luthor: Man of Steel and Joker. His style is definitely not for everyone, but I’ve always been a big fan of his depiction of the Dark Knight, and seeing his art in this oversized format is truly amazing. The painted style that he employs in this issue is really moody and evocative, and helps set a very distinct tone to differentiate itself from other Batman titles on the shelf. Sometime Bermejo’s art can look a little stiff, but that’s definitely not the case here, as his style has a fluidity that I haven’t seen from him in recent years.

While it’s probably a little too early to start making comparisons to Watchmen, Batman: Damned is definitely worth the price of admission if you’re curious. You’re definitely getting a much larger and nicer presentation for your money, and the art is truly worth seeing in this large format. While I don’t believe that the Joker is dead, the fallout from his death could lead to a lot of interesting ways for this story to go, and I’m really interested in seeing how this all plays out.