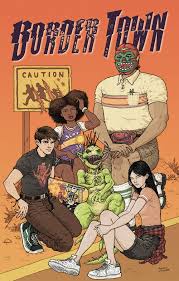 The lines between the real world and fantastical become even more blurred in Vertigo’s new series Bordertown, which stands as one of the coolest debut issues of the year. Eric M Esquivel and Ramon Villalobos’s new series is 100% politically minded (it takes place along the US/Mexico border, after all), but it actually adds a lot to the themes of the book, and in doing so, becomes a pretty necessary read for our modern times.

Frank Dominguez has moved to Devil’s Fork, Arizona. After being expelled from his previous high school, his mom thinks it’s a good idea to move to a new town with her long-distance boyfriend and start over. But Frank finds that he’s still having trouble fitting in, and quickly becomes the target of the local bullies at his new school. Thankfully for him, but not so much for the town, a monster that’s been terrorizing the desert arrives just in time to save him, but not before Frank and his friend’s have to take off from the cops.

As I mentioned before, Bordertown is definitely a politically charged series, so if you’re looking for an escape from the real world, this might not be the book for you. But Eric M Esquivel’s script is chock full of ideas of like-able characters, and really looks to be something special. Esquivel does a great job of not only getting into Frank’s mindset, but he also makes his friends interesting too, which is pretty impressive seeing as how this is only the first issue.

On the art side of things, Ramon Villalobos’ style is a really cool mix of Chris Burnham and Mike Allred. Making high school interesting is pretty difficult in comics, but Villalobos’ character work is fantastic, and his depictions of body language and facial expressions are awesome. But where Villalobos really shines is with the monster design, which goes from a giant, mythical beast to a tiny little creature capable of getting into small cracks in our dimensions.

Bordertown is a really interesting and thoughtful comic, and if everything is right in the world, it’ll become the breakout smash of DC’s new Vertigo relaunch. There’s a lot of interesting and topical ideas in Esquivel and Villalobos’s book, and while it may not all be comfortable to read, it’s putting a fantastical spin on a real-world issue in a way that will hopefully inspire people to seek out how they can help the issues this book focuses on. It’s also got cool monsters, which is always a bonus too.