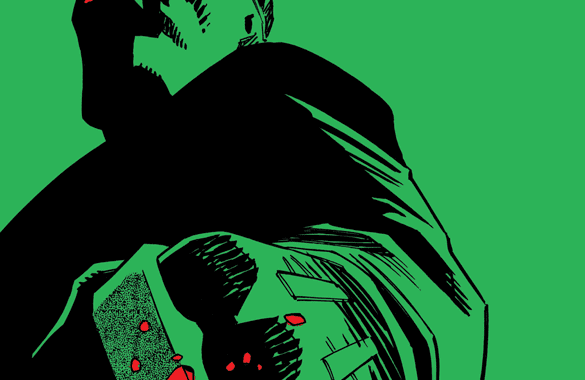 After giving up a life of crime as the masked criminal “Dead Rabbit”, Dobbs still can’t shake the need to pull of a job. However, his new “past time” isn’t robbing banks or working for the mob, it’s hunting down the worst of the worst and taking them out before they get too out of hand. Despite lying to his ailing girlfriend, using the “Dead Rabbit” thief for good is making Dobbs feel like he’s actually making a difference. Little does he know that the Mob has gotten wind of the return of the Dead Rabbit, and they’re ready to hunt him down for his past deeds.

Gerry Duggan’s script is filled with a lot of black humor, but it’s also amazingly topical too. While we know that Dobbs’ current deeds have noble intent, and we know how Dead Rabbit‘s story is probably going to play out, we still can’t look away. Duggan gives Dobbs a lot of personality in his inner monologues, and it ends up leading to a really cool and interesting character that adds a lot to the crime genre. You legitimately feel for Dobbs, as he’s trying to help out in the only way that he knows possible.

John McCrea is well known in comics thanks to his run on Hitman, but with Dead Rabbit he mixes up his style a little bit. That’s not to say it’s a bad thing that he’s changed his style, just that it took me checking (and re-checking) the credits on the book to make sure it was the John McCrea I was thinking of. McCrea adds a lot of mood and heavy shadows to this book, which adds a lot to Duggan’s script, with the highlight being the fight between Dobbs and some kidnappers midway through the book.

If all goes well, Dead Rabbit could fill the void that crime books like Criminal and Incognito have left on the shelf. I wouldn’t initially think that Gerry Duggan would have this kind of series in him, but I was very pleasantly surprised with this series, and I can’t wait to see how it all plays out.