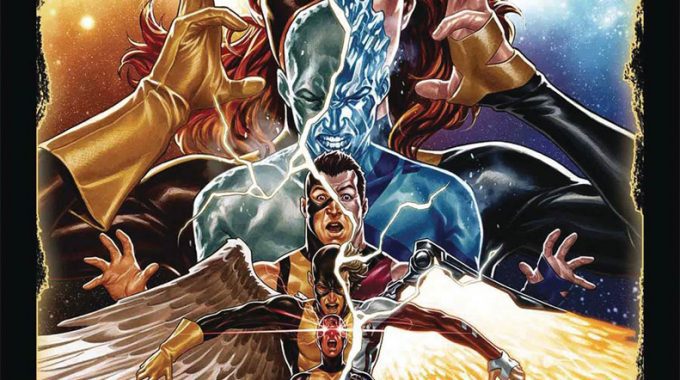 It’s been a while since we’ve had an X-Men event, but all that is changing now with Extermination. Serving as the catalyst for the next big refresh of Marvel’s Mutants, Extermination, from Ed Brisson and Pepe Larraz, is chock full of what makes the X-Men, well, the X-Men. No, not mutants fighting one another (although that’s certainly here in this opening issue), time travel!

Yes, the X-Men are back into some time travel shenanigans, and it’s all centered around the young original X-Men that have been hanging around the Marvel universe for years now. When the Mutant hunter from the future, Ahab, attacks Cyclops and Bloodstorm (a vampire version of Storm-yes, regular Storm is around, don’t ask), Scott Summers needs to assemble his teammates to find out the mystery behind their attacker and what role they play in the time stream (despite them not being in the right timeline to begin with).

Ed Brisson’s script sets the stage really well for this crossover. Brisson’s slowly been making a name for himself in the Marvel writing stable, working his way up the ranks, and Extermination serves as arguably the biggest story he’s written for the publisher. While his opening for the storyline isn’t very new reader friendly, I’ll admit that it’s really engaging, and legitimately has me wondering if the X-Men from the past will (finally) be sent back to their home timeline by the time this wraps up.

Like Brisson, Pepe Larraz has been working his way up the ranks at Marvel, though his rise has been at a much faster pace than Brisson. Much of this is due to his art style, which is pretty impeccable. A mix of Humberto Ramos and Joe Madiuera, Larraz is able to give his characters a slightly cartoony look, but not so much that it ruins your ideas of what the characters should look like.

While it remains to be seen how easy to follow Extermination will be, this opening installment is well-crafted, and as someone who only reads the Red and Gold iterations of the X-Men books, this does have me interested in picking up the crossover as a whole. Whether I’ll regret that decision remains to be seen, but I have hope that this could be one of the better stories out of the modern age of the X-Men.