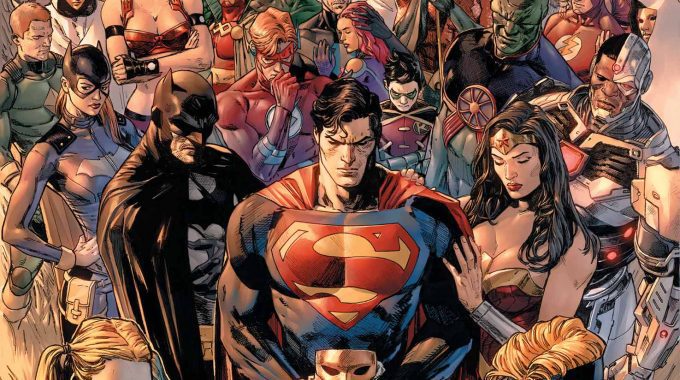 DC’s latest event Heroes In Crisis is poised to be different from other big storylines. With a focus on the trauma that superheroes and villains endure in their adventures, Tom King and Clay Mann’s new event looks to not only have some big revelations for the DC universe at large, but it could even change the way we look at these heroes and their adventures.

After a rash of murders break out at The Sanctuary, a retreat for super powered individuals, Batman, Superman, and Wonder Woman are at a loss. Who is behind this murder spree? Is it Harley Quinn, who ‘s just arrived at a local diner and is battling Booster Gold? Could one of the younger heroes finally snapped? Or is it someone the heroes least expect?

That’s the main mystery that start off this event, and as expected, Tom King sets it up perfectly. While it’s a little odd having the focus of the issue be primarily on Harley Quinn and Booster Gold, with the main murder being in the backdrop, this kind of storytelling is what makes King unique in comics. Despite not having the murders be the main focus, there’s still plenty of gripping moments in this opening issue, the highlights being the “testimonials” from the individuals at Sanctuary. There’s a lot of emotional depth in those pages, and some of them come from the characters you’d least expect.

Clay Mann has become a major force at DC since the Rebirth initiative began, and with Heroes In Crisis I expect him to become the next big artist at the company. Simply put, his artwork is stunning, pulling details out of King’s script that I don’t even think King was aware of. Even more impressive is that Mann is able to switch from the quiet testimonials to a stunning and brutal fight between Harley and Booster Gold with ease, making him arguably the most versatile artist in comics today.

Even if Heroes In Crisis didn’t have the names Tom King and Clay Mann attached to it, I’d be intrigued. But since it has the same talent behind “The War of Jokes and Riddles” (aka the best Batman story of the past five years), it’s definitely a book that you should keep your eye on. I initially thought that I knew what this story would be like, but I was legitimately surprised at one of the big deaths in this issue, as it was a character that completely expected to be fine. While I don’t know where this story will go, after Sheriff of Babylon, Batman and Mister Miracle, I should learn that Tom King always has a trick up his sleeve, and that’s why he has more than earned my time and money.