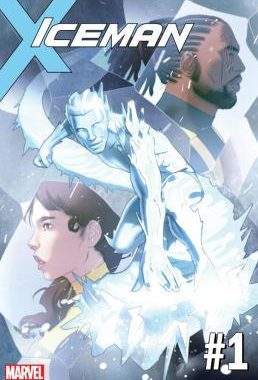 After being canceled last year, many thought that Bobby Drake, also known as the X-Man Iceman, would be back to being relegated to the X-Menbooks. Luckily for fans of the cool mutant, Bobby is back in a new solo series, with his former writer Sina Grace and artist Nate Stockman. The series focuses on Bobby’s efforts to find out who’s hunting Morlocks for sport in the sewers of New York City. That sounds like a heavy comic, for sure, but surprisingly Grace and Stockman’s Iceman #1 is a really fun and engaging opening issue.

Teaming up with Bishop, Iceman finds that this Morlock massacre isn’t all it seems, and that he just may be in over his head. While it’s a little weird seeing the Morlocks again in an X-Men book, writer Sina Grace has some fun with this being “Mutant Massacre Vol 2”, and actually adds some pretty interesting stakes to the book too.

Speaking of Grace, he’s got a really great take on Bobby Drake, who’s a lot funnier than I remember him being. Bobby Drake is at an interesting point in his life now, and while he’s come to terms with his sexuality, it’s still difficult for him to date, and that makes for a really relatable read as he navigates the world of dating in the modern day. Drake’s also a bit of a goofball, but it’s charmingly offset by the fact that he has a pretty big sense of honor, so he’s not a complete jokester.

Nate Stockman’s art is, simply put, awesome. He has a very crisp and clean style that works wonders for this series, and his mutant designs are dynamic as well. Stockman has a lot of fun playing around with Iceman’s powers, and the action sequences that Stockman comes up with are extremely fluid and engaging.

I fell off the previous Iceman series, but after reading this issue, I’m definitely going to go back and check it out. Sina Grace’s characterization of Bobby Drake is a lot of fun to read, and has made me care about a character that I honestly never gave much thought to before. But it looks like Iceman falls into that old adage: any character can be great if they have the right creators behind them.