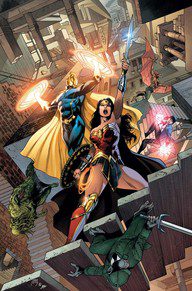 With one issue down, the “Dark” version of the Justice League is ready to rumble with the creatures that go bump in the night. James Tynion IV and Alvaro Martinez’ opening issue got the team assembled and left us hanging with a fight cliffhanger, and luckily for us, the second issue picks up right after that cliffhanger.

Well, almost right away. After giving us some background information on why Wonder Woman is leading this team, Tynion’s script jumps back into the action we left off on, and it’s clear that this new makeshift group of characters has a lot to learn when it comes to being a team. This issue is pretty heavy on Swamp Thing and his journey, and while that makes for some more intrigue with the team, it is a bit of a bummer that the other members of the team are taking a bit of a backseat. But the team is a cool mix of characters, and it’s expected that some narrative strings will need to be threaded in some early issues, so it still gets a pass from me.

Alvaro Martinez’ art is a great fit for this book, as he’s able to mix up the dark, spooky side of this series and the excellent action sequences with ease. There’s a great fluidity to Martinez’ work, and his depictions of the members of the team are amazing, his Swamp Thing being the stand out. I can’t wait to see what else he’s got up his sleeve.

Justice League Dark is exactly the kind of series DC needs right now, and the perfect book for comic readers who like superhero fare, but want something a little darker. While this issue was definitely slower than the previous one, there’s still plenty to like with this title, and if it keeps up with the potential, it’ll be an awesomely unique series.