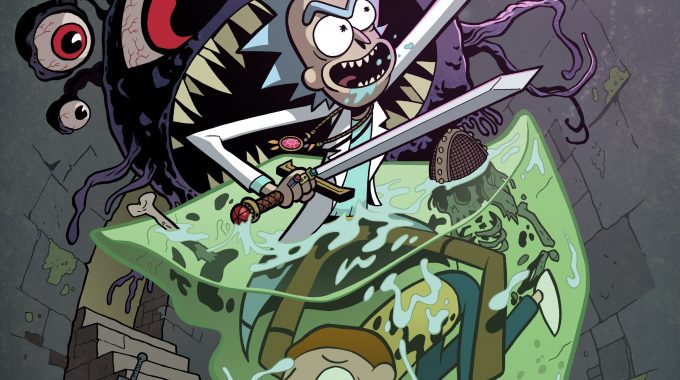 It seems like you can’t go anywhere without seeing Rick and Morty on something. TV, lunchboxes, umbrellas, toys, you name it. But no where is there brand more apparent than in Oni Press’ line of comics, which keep the (overzealous) fans of the series sated with monthly doses of their favorite psycho grandpa and his put-upon grandson. So far we’ve really only had the main series and few spinoffs, but Rick and Morty vs Dungeons and Dragons is the first crossover event for the franchise, and it boasts a pretty big name for co-writer: The Kingkiller Chronicle author Patrick Rothfuss. Aided by co-writer Jim Zub and artist Troy Little, Rick and Morty vs Dungeons and Dragons is both a loving tribute to the tabletop classic, and a worthy entry in the growing Rick and Morty pantheon as well.

After overhearing a bunch of kids in class talking about Dungeons and Dragons, Morty decides that he wants to get into it as well. Unfortunatley, peer pressure and a bunch of D&D books isn’t quite enough to help Morty understand the rules of the game, so he regretfully turns to the only person who can help him: his grandpa Rick. To Morty’s surprise though, Rick is an “OG D&D player”, and is ecstatic to help Morty set up his character and learn the ropes. What could go wrong?

I’ve got to say, Patrick Rothfuss and Jim Zub have crafted a really fun miniseries here. This comic reads almost exactly like an episode of Rick and Morty, and it moves along at a really quick pace, something that’s unfortunately lacking in a lot of modern comics. Morty and Rick are exactly as you remember them from the show, and I was pleasantly surprised by the unexpected narrative curve from having Rick being super into Dungeons and Dragons, and it’s kind of nice to see him take a legitimate interest in his grandson’s name, even though we know it’s going to blow up in both of their faces.

Troy Little’s style is perfectly suited for this series, as it’s spot on with the look of the show. Past Rick and Morty comics have had the artists take a few liberties with the established look of the world, but here Little is able to not only nail the look of Rick and Morty’s world, but also making sure they seem fluid and not extremely stiff either. While I’m bummed that we don’t get a lot of Little’s take on the monster side of D&D, I’m pretty excited to see what he’s got planned.

Fans of Rick and Morty, Dungeons and Dragons, and even Patrick Rothfuss’ novels will find plenty to like with Rick and Morty vs Dungeons and Dragons, and it could end up being one of the better comics that Oni Press releases for the franchise. It’s a book that has a lot of fun poking a little well-deserved jabs at the current D&D resurgence, and it’s a solid comic to boot.

Comic Review: War of the Realms: Strikeforce: The War Avengers #1

War of the Realms: Strikeforce: War Avengers #1 (Marvel Comics) The War of the…

11 - 7 daily for in-store visits, with restrictions, and curbside pick up.