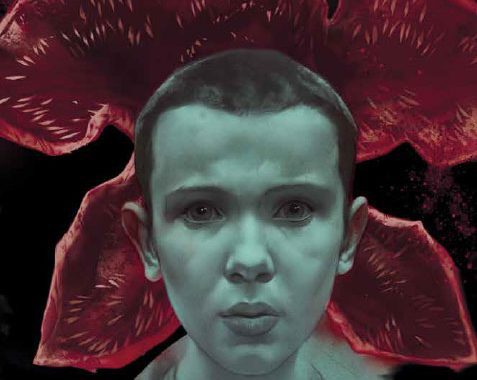 This opening issue starts off much like the opening of the show, but from Will’s perspective. After successfully avoiding the demogorgon, Will hides out in a shed an falls asleep. But when he wakes up, he finds himself in a world that is similar to his, but with the slight difference of looking like it’s covered in dust and slime. Will is in the Upside-Down, with no way of getting out.

Jody Houser’s script does a great job of matching the feel of Stranger Things, and all of the characters you remember, while only being in a comic for a brief moment, sound and act like their small-screen counterparts. Houser plays up the group’s nerdiness in fun ways, and she also effectively adds a lot of tension to Will’s scenes, which is very impressive since we know how his story ends.

Less impressive though is the art by Stefano Martino. While he’s able to match the eerie mood of the show, his faces aren’t very detailed and look a little rushed at times. He’s able to match the character’s to the actors faces fairly well, but there are many panels that look like Martino was under the gun and needed to get the pages out as fast as possible. Hopefully future issues have a little more care put into them.

It’s always difficult when a tie-in property tries to tell “the missing piece” of an existing story, but so far Stranger Things is a pretty solid entry in the franchise. With any luck, it’ll drive more people into comic shops looking for it, which is pretty much the best thing you could ask for of any tie-in comic.