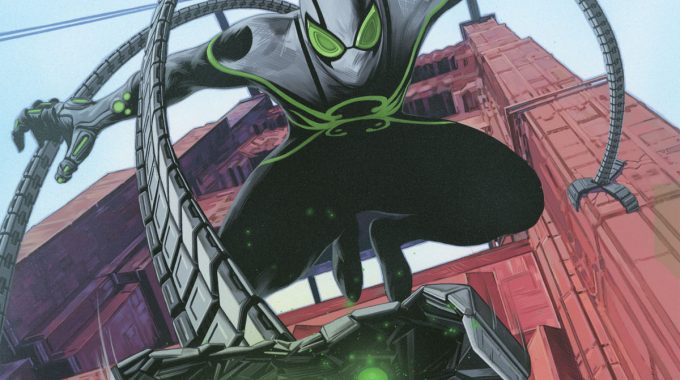 It’s hard to think of a character that’s had more changes in the past decade than Otto Octavius. He’s gone from a dying husk, to taking over Spider-Man’s body, to having his consciousness put into a robot body, and is now in a NEW cloned body of Peter Parker with a new name and mission. While it’s enough to make a newcomer’s head spin, if you’ve been following Otto’s story like I have, it’s turned him into a character that’s far more nuanced than just being a Spider-Man villain, and he’s ripe for an ongoing series to flesh out his character. While Christos Gage and Mike Hawthorne’s Superior Octopus isn’t the start of a new ongoing yet (Superior Spider-Man, from the same creative team, won’t start for a few months), it does give us a neat look into the character’s current goings on, and how he’ll play into the Spider-Geddon event later on.

As “the hero San Francisco deserves”, Otto Octavius has a different way of taking on crime in the city. Instead of just beating the criminals up and sending them to jail, Otto has decided to recruit them into being his eyes and ears in the city. With his new plan to take on crime and his new identity as a Professor at a big university, Otto’s seemingly got in made….until Arnim Zola and Hydra reappear, looking to recruit Otto back to their ranks after the fallout of Secret Empire.

It’s a lot of fun reading Superior Octopus, and much of that is due to Christos Gage’s script. Like frequent collaborator Dan Slott, Gage nails the over the top dialogue that Otto is known for, which makes for a pretty funny read, but Gage also adds weapons and strategies to Otto’s mission that actually make a lot of sense. Outfitted with everything from sonic-blasting tentacles to specialized lenses in his mask, Otto’s more than prepared to take on the C and D level villains of San Francisco. But what really makes this issue work is the amount of time Gage spends filling us in on Otto’s life since the events of Clone Conspiracy. Amazingly, Gage doesn’t make this issue feel like an info dump, and he also doesn’t make it feel like homework to get to the upcoming Superior Spider-Man series either. There’s a fantastic balance between action and information that makes this issue well worth the price of admission, even though it doesn’t really tie into the Spider-Geddon event that much.

Mike Hawthorne’s style is a great fit for Gage’s script, as he’s able to not only make Otto a believable hero in the action scenes, but he’s also able to make the villain’s reactions to seeing him funny too. There’s a great sense of fluidity to Hawthorne’s art, where even static panels of Otto standing look like they’re moving thanks to his tentacles. If he can keep up this same output, Hawthorne will quickly become one of the biggest talents at Marvel, and I can’t wait to see his art improve even more on the Superior Spider-Man series.

If you were a fan of Dan Slott’s Superior Spider-Man run, then you absolutely need to pick this issue up. While it doesn’t play a major role in the build up to Spider-Geddon (there’s only a cursory nod to it in the main story), it’s a necessary, but fun, teaser for the upcoming new Superior Spider-Man series that will be here in a few months. Here’s hoping Otto still struggles with his evil tendencies in that series, cause it makes for a great read for us.