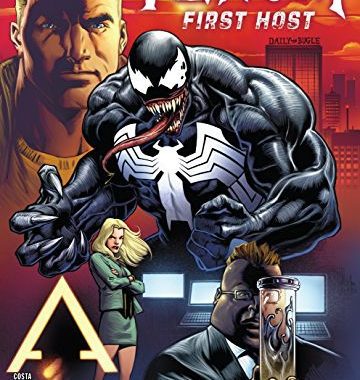 The current Venom run is doing some pretty incredible things with the character, exploring the history of the symbiote and it’s long connection with the universe. Which makes Venom: the First Host, a new miniseries from Mike Costa and Mark Bagley, a weird one. While it’s showing off a new part of the history of Eddie Brock’s “other”, the fact that we’re getting some additional “never before seen” history behind the creature at the same time as the current run on the character makes The First Host seem repetitive, and if I’m being honest, a little boring too.

The First Host posits that the original host for the symbiote was a Kree soldier, and now he’s come looking for his property back. Eddie Brock, out on his usual “patrol”, encounters the alien at the end of the issue, and, well, here we are, with a new miniseries that’s going to presumably “change everything we know about Venom”.

Mike Costa has experience with the character from the previous Venom run, and I’ll admit, that run wasn’t too bad. But I can’t help but feel like this is a holdover from that run, and Marvel is allowing him to to finish it as a miniseries to make amends for Donny Cates relaunching the series. It’s really the only thing I can think of that would explain this miniseries even existing, especially since it’s covering a lot of similar ground that Cates’ run is. That’s not to say Costa’s script is bad, it’s just really hard to read this and not compare it with the other (better) Venom series that’s on the stands right now.

At least both of these Venom series have great art. Classic Marvel artist Mark Bagley could probably draw Venom in his sleep at this point, but he shows no signs of phoning it in with this issue, which is really nice to see. In an age where a lot of legendary artists are content with resting on their laurels, it’s nice to see that Bagley is still cranking out pages that are reminiscent of his glory days of the 90’s.

I’m sure there will be Venom fanatics who will eat The First Host up, but for me it just doesn’t do enough to justify sticking with it. It’s just too similar to what’s happening in the current run of the regular Venom series, and there’s nothing in here that’s been revealed so far that makes me think it’ll surpass that series. Oh well, at least we’ve still got the regular series.