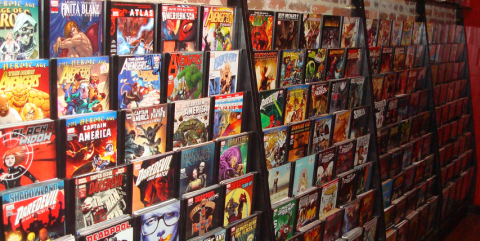 It’s been awhile since we’ve looked at the three big publishers in comics, but every now and again it’s good to take stock at what Marvel, DC, and Image are putting out onto the shelves and play the “who’s doing it better?” game. Unlike years past, though, there’s actually no real clear winner when it comes to these publishers, as all of them, while having their faults, are putting out some really awesome material as of late. So lets look at the pros and cons of each publisher, and try to come up with some sort of consensus here.

Marvel has long held the dominate position in the sales charts, and while a lot of that has had to do with shady business practices in the past, I honestly think that any market dominance now is totally due to the quality of the books they’re putting out. While I’ll always scoff at the publisher’s insistence to renumber their series at a seemingly annual basis, this latest batch of relaunches has really worked out in their favor. Of course, I’m a firm believer that that’s more because of the creative teams on the series as opposed to the shiny new numbers, but for a long time Marvel has been in a “building phase”, and it’s finally started to pay off. They’ve got some truly great talent with writers like Donny Cates, Kelly Thompson, Matthew Rosenberg, and Tom Taylor, and while the art for many of their titles are still not that great, their stable of big guns like Ryan Stegman is still enough to carry the load, including getting Invincible‘s Ryan Ottley for Amazing Spider-Man, a move that still blows my mind.

However, for as much postive momentum Marvel has, there’s always the chance that they could mess it up. The current Hunt for Wolverine “mini-event” hasn’t done too much to generate hype for the Canuck’s return, and I worry that making the relaunched Uncanny X-Men a weekly series will do more harm than good, even though it’ll feature some really fantastic creative teams. It’ll just take one missed issue to really throw a wrench into their plans, and with the hyped up Dan Slott series Tony Stark: Iron Man already delayed, I’m not very confident n Marvel’s continuing this upward trend.

Ah, DC Comics. The winner of the last publisher head-to-head, DC has continued putting out some pretty strong material, but it’s not where you’d expect it to be. Tom King’s Batman run has continued to defy expectations, and his Mister Miracle mini series with artist Mitch Gerads is going to go down as a new classic in the medium. But the “big get” of Brian Michael Bendis jumping ship from Marvel and taking over the Superman books hasn’t been the slam dunk sales wise (or narrative wise) that DC was hoping it would be, but it’s got potential. However, what should be DC’s biggest book, Justice League, written by Scott Snyder no less, has felt really “off” lately, almost like it’s outside of the mega-successful writer’s wheelhouse. Maybe that’s due to DC fatigue (Justice League did come right after Metal and No Justice), or due to the fact that the heavily publicized artist Jamie Cheung’s work on the book has only been….um…the first issue of the series, remains to be seen.

But DC isn’t quite in bad shape yet. I’ve already mentioned King’s output for the publisher, but they’ve also got a fantastic Hawkman series from Robert Venditti and Bryan Hitch that amazingly is the most succinct and easily to follow Hawkman series ever, and they’ve got some pretty interesting things coming down the pipeline, like Grant Morrison taking over Green Lantern, and Kelly Sue DeConnick taking over Aquaman in November. It remains to be seen how these new writers will pan out on the series, but DC’s confidence is allowing them to take more risks than the other publishers lately, and for the most part, they’re succeeding

Oh Image, the house that Spawn built and Walking Dead renovated. Priding themselves on giving full creative control to the writers and artists that work for them, Image has everything from mainstream hits like Saga and The Walking Dead to weird one offs like Shirtless Bear Fighter. It’s that diversity that makes them stand out from the pack, but it’s also weirdly their greatest weakness too. It seems like they’re the Netflix of comic publishers, releasing so many new series that it’s almost impossible to keep up with. And while there are some top books from creators like Robert Kirkman, too many times it’s from creators of either a lesser pedigree or ones that are working their ways up the comic ladder.

However, Image is the one publisher that not only treats their creators right, but can also help them get bigger and better deals, either with them or with one of the other big two. Do you really think Donny Cates would have been put on Thanos or Venom at Marvel if God Country wasn’t as big of a success as it was? While I’m sure the heads of Image would bristle at this comparison, they are the kind of “farm team” for the major leagues of Marvel and DC, even though many of the creators that make their way through the Image ranks eventually find themselves back at Image after they’re done with the big two.

So in all honesty, it’s kind of hard to pick a winner for this update. While all of these publishers have their own strengths and weaknesses, there aren’t any that are so bad they push any of them down, or so great that they show you a clear winner. So for probably the first time in the history of these articles, I’ve got to declare a three-way tie, and just tell you that it all comes down to personal preference for who’s the best publisher on the stands.