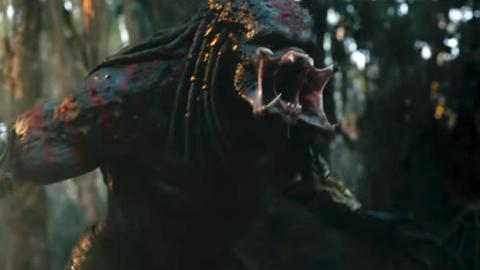 For being one of Hollywood’s most iconic monsters, The Predator sure hasn’t had very many great movies. Sure, the 1987 original is a classic, and I’ll always got to bat for Predators, the 2010 attempt at rebooting the franchise, but by and large ol’ mandible face has always had a tough time at the cineplex (I know there are some who’ll champion Predator II, but I’m not one of them). With that comes writer/director Shane Black’s attempt to launch a new series of films. After successes with Kiss, Kiss, Bang, Bang, Iron Man 3, and The Nice Guys (not to mention writing Lethal Weapon and being in the original Predator as Hawkins), it would seem that Black’s off-center charm would be just the thing to reinvigorate the franchise.

Unfortunatley, that’s not quite the case here.

Make no mistake, there are plenty of moments that work in The Predator. But this is also a film that seems at odds with itself. It wants to both be a wacky action comedy reminiscent of the 80’s and 90’s, but also a badass, modern spin on the Predator franchise. There are tonal shifts so abrupt and sudden that you may feel a sense of whiplash, yet it’s weirdly still entertaining, albeit with a bunch of caveats.

This new installment of the franchise finds soldier Quinn McKenna (Boyd Holbrook) coming across the famous alien while on a military assignment. After the creature causes his mission to go sideways, he’s brought into custody by the mysterious Traeger (Sterling K Brown), a shady government operative who’s very keen on using the Predator for his own means, which are never really revealed to us. After Quinn’s son Rory (Jacob Tremblay) gets ahold of the Predator’s gear (more on that plot point later), he becomes a target for the creature. Aided by scientist Casey Bracket (Olivia Munn) and a host of prisoners headed to a mysterious government facility (Alfie Allen, Keegan Michael-Key, Thomas Jane, Trevante Rhodes, and Agusto Aguilera), Quinn has to protect his son from the Predator, but there’s something much, much bigger in store for them as well, as the Predator has something else hunting it.

One of the big issues I have with The Predator is that it seems to be cramming a lot into its runtime, which at just under two hours should have plenty of room to breathe. But there’s weird moments that come together with pretty glaring issues, and we’re supposed to just run with it. As good as the characters that Keegan Michael-Key, Thomas Jane, and the rest of their gang of whackjobs are, we don’t really have any idea where they or Quinn are headed to. It seemed like Shane Black and his writing partner Fred Dekker just decided to have a group of loose cannons fight a Predator, and took the quickest route they could to get to that scene. The same can be said for a lot of The Predator‘s narrative, as he lets some moments really shine (like the Predator’s breakout from the lab), but seems to rush through things, especially towards the ending, which is arguably the weakest part of the film.

The Predator, like most Shane Black films, features a character that’s a kid, but with this film he falls into a trap that unfortunately befalls many films. Jacob Tremblay’s Rory falls on the autism spectrum, and once again, we’re given the magical Hollywood version of autism, which basically means that Rory has superpowers and figures out how the Predator’s gear works. Despite the fact that I’ve always been irked by Hollywood’s depiction of people on the spectrum, this also files under Black whipping through areas of the film that could’ve been expanded on in fun ways. The idea of the Predator stalking someone through the suburbs (on Halloween, no less), is very cool, but the execution of that idea falls very short of what you would expect.

It’s not all bad in The Predator, though, as the cast does make a lot of this material work, as all over the place as it seems. The standouts are Sterling K Brown and Olivia Munn, who are both very much at ease with Black’s dialogue. Brown in particular is a lot of fun to watch, as he’s clearly having a ball playing the bad guy in this film. Even though there’s a lot of weird editing surrounding his character’s fate at the end of the film, there’s plenty to enjoy from him. Olivia Munn also continues to impress with each new movie she’s in, and while there’s plenty of discussion around her admirable and inspiring decision to speak up about some of the behind the scenes controversies surrounding this film, I hope that it doesn’t distract people from the fact that she’s also extremely great here. She easily holds her own with the other actors in the film, and if The Predator ends up being a hit, I could see her appearing in a lot more films down the road.

Aside from those two, there’s a lot of characters in The Predator, and while Keegan Michael-Key and Thomas Jane are the standouts of the “loony bin” team (even though Jane’s tourette’s afflicted character is a little dated), that means that other characters, like Alfie Allen’s, aren’t given as much to do. The same can arguably be said for Boyd Holbrooke’s Quinn, who’s “let’s light ’em up” shout is really the only thing I can really remember about him, which is a shame cause I’ve liked his work in Narcos and Logan.

The action is another area where The Predator shines. While a lot of the big scenes and moments are spoiled slightly by the trailers for the film, you still get some pretty fantastic action and plenty of gory Predator kills. I’d say that The Predator has more blood than any other film in the franchise before it, and there are a lot of fun moments with the alien species’ technology. The “bigger Predator”, for lack of a better word, is also fairly intimidating, even though there are times where the CGI looks a little wonky. When compared to a guy in a suit, there’s really no comparison.

The Predator is an interesting failure, as it doesn’t quite match up to your idea of a “Shane Black” film. There’s a lot of quips and a little bit of shaking up of the franchise’s formula, but there’s also the feeling that Black doesn’t really care about what he’s working on. Directors need to take a paycheck every once and a while, but whether Fox decided to edit the final act to suit what they wanted or Black just wasn’t into the story, the film definitely suffers from a case of not knowing exactly what it wants to be. The ending builds up to something that you think is going to be really cool, but instead ends up being extremely goofy, almost to the point where you wonder if you even want another Predator movie that follows this one. For a franchise re-starter, that’s not a good sign, and for a director like Shane Black, it’s a major step back film-making wise.