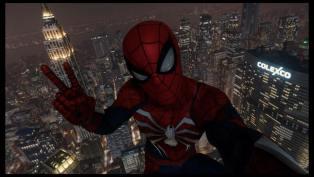 Spider-Man has starred in his fair share of video games throughout the years, but the past few years have seen a steady decline in the quality of his interactive titles. The days of Treyarch’s Spider-Man 2 and Web of Shadows had all but disappeared by the time the Amazing Spider-Man 2 tie in game came around (a game that somehow pissed me off even more than the movie did). For a long time, it seemed like I’d have to settle for getting my web-swingin’ fix from the regular Lego Marvel games released every few years or so.

Until this past Friday, when Insomniac’s Spider-Man was released.

Simply put, this is the Spider-Man game I’ve been waiting for my whole life, I just didn’t know it. Insomniac has taken all of the best aspects of Spidey’s many games and put them into one game that, while a lot of different things gameplay wise, also feels extremely fluid as well. This is a game that remembers that Peter Parker is also a big part of Spidey’s life, and amazingly, when you take control of Peter you’re never waiting for your chance to get back into the suit and start swinging around. The same can be said of Spidey’s supporting cast, who not only play a surprisingly big role, but one of them is even playable at times too.

Everything about this game is dedicated to giving you the most Spider-Man-like experience possible. Swinging through the city is an absolute blast, and the combat expertly has you dodging, webbing, and punching your way through goons, all while fielding numerous phone calls from Peter’s family and friends reminding you of other, non-superhero commitments that you have. Whether it’s Aunt May or Spidey’s boss (who I won’t spoil here), every phone call not only enriches the world of the game, it adds a weird sense of stakes to every aspect, as it reminds you of the everyday sacrifices Peter makes to try and help out the city he loves. There’s also regular updates from J Jonah Jameson, who now runs a podcast after leaving the Daily Bugle, a move that’s so perfect that I’m shocked the comics didn’t think of it first. Hearing Jonah’s insane spins on your actions in the game are hilarious, and many times I’ve stopped what I’ve been doing just to listen to them.

In the best ways possible, this game is extremely similar to Rocksteady’s Batman games, but if there’s any character that can ape the “Arkham” formula, it’s Spidey. The comparisons between this game and the Arkham series are definitely well-warranted, with the spider-sense alerting you of incoming enemies (like Batman’s alerts in combat), to even using stealth tactics like webbing areas of the environment to distract enemies. But in all honesty, it seems more like Insomniac has taken the things that Rocksteady pioneered and just improved on them.

My favorite thing about Spider-Man isn’t the combat or the swinging though, it’s the suits. Like all Spidey games, there’s a bunch of unlockable costumes that you can wear while playing. Unlike past games though, these suits aren’t purely cosmetic. Each one has a unique main ability that is equipped with the suit. Spidey’s Infinity War costume can pop out four extra arms, or his Noir universe suit can render him invisible and silent to enemies for a short time. But even cooler than that aspect is the ability to take these main powers and attach them to the other suits in the game, creating a really interesting “create your own Spider-Man” element. Want to have the Homecoming home-made suit, but with an ability to make a hologram double of yourself? Go for it. The level of customization for the suits is pretty incredible, and makes collecting the bonus elements of the game not only more rewarding, but gives you a legitimate reason to get them as well.

When it comes to those side-missions, so far those are pretty fun too. While I’ve already come across a lot of repeat carjackings, muggings, and drug deals, they haven’t reached a point where they ‘ve become tedious or repetitive. I’m sure that will happen at some point, but so far I’m still having a blast stopping cars with my bare hands and smacking goons in the face with webbing. Not only that, but the photo mode is one of the best elements of the game, and it doesn’t even involve doing any actual gameplay!

There’s really only a few problems I have with this game, but none of them should dissuade you from playing. One issue I had (that was pretty much fixed after a few minutes) was the web swinging, which has a little bit of a learning curve at the beginning of the game. After I played for an hour, it became extremely intuitive and awesome, but it’s such a different experience from the other Spider-Man games I’ve played in the past that I had to completely reteach my brain how to do it. But again, that’s just Insomniac looking at past Spidey games and figuring out a better way to accomplish it. Plus, the recreated New York City is so cool to swing by that you’ll probably end up just killing time doing that instead of completing the actual story missions. There’s also a series of power-ups that involve finding Peter’s old backpacks that he’s left behind webbed to the buildings, even though Pete’s webbing would have dissolved two hours after he stuck the packs to those areas. But that being my only real (super-nitpicky) complaint should give you a pretty good idea of how much I’m enjoying this game.

Insomniac’s Spider-Man game will definitely eat up a good chunk of your video gaming time, and when you’re not playing it, you’ll be thinking about it. If you own a Playstation 4, you owe it to yourself to try it out, and if you don’t own a Playstation 4, it’s so well done that you should find a buddy who has one, try out the game, and it could very well convince you to pick one up. In an age where superhero movies are kings of the box office, Spider-Man shows that video games might be the next conquest.