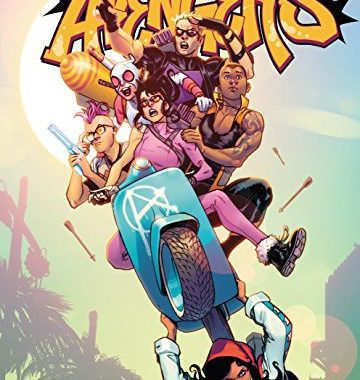 With the Avengers getting a brand new relaunch, it was only a matter of time for their West Coast counterparts to make a return. While this sister team typically featured Avengers mainstays like Hawkeye and Iron Man, it was always a little sillier than the main team, and that’s a tone that’s still apparent with West Coast Avengers #1, the brand new start from writer Kelly Thompson and artist Stefano Caselli. Despite featuring a team of relatively new characters, West Coast Avengers #1 is still really charming, even though the team features Gwenpool, easily my least favorite new character Marvel has introduced.

Kate Bishop has relocated Hawkeye Investigations to the West Coast, and she’s quickly in over her head. Realizing that she needs back up to help out with some of her more strange (and dangerous) cases, Clint Barton (the other Hawkeye), America Chavez, and newcomer Fuse convince her to start up a new chapter of the West Coast Avengers. However, the superhero population on the West Coast is decidedly more sparse than the East Coast, and the responses to Kate’s call to arms are few and far between, leading to only Gwenpool signing up, and Quintin Quire coming on board, but only if the rest of the heroes agree to be a part of his in-progress reality show. But when the going gets rough, these heroes will find their way and do the right thing, right? Right?

That’s the main crux of Kelly Thompson’s script, and I have to say, with this series she’s officially become my new “writer to watch”. Instead of taking the usual route and slowly building this team together, Thompson has the entire team not only together by the end of this issue, but already on their first mission. There’s no wasted space in Thompson’s script, and she has a lot of fun having this mis-matched batch of characters bounce off of each other. Hell, she even makes Gwenpool not completely annoying, which is a herculean effort in my eyes. I can’t believe I’m saying it, but I’m actually okay with the character for once.

Stefano Caselli’s art is a perfect fit for this issue. The script bounces between ridiculous action and quiet, “interview style” asides, and Caselli absolutely nails both moments. In many cases, Caselli’s art adds to the fun of Thompson’s script, where many of the laughs come from the body language and facial expressions of Kate, America, and Clint.

I’m honestly really surprised at how much I enjoyed West Coast Avengers, but at this point I shouldn’t be that surprised, as Kelly Thompson is now three for three with me (her other series being Rogue and Gambit and Mr and Mrs. X). The best way I can describe this series is, well, it’s just fun, and reminds me of series like Superior Foes of Spider-Man and Astonishing Ant-Man. There’s plenty of jokes to be had at the expense of the characters, but at no point are those jokes totally out of character or ruining what has come before. This is easily my biggest surprise of the year, and I can’t wait to see the next issue.