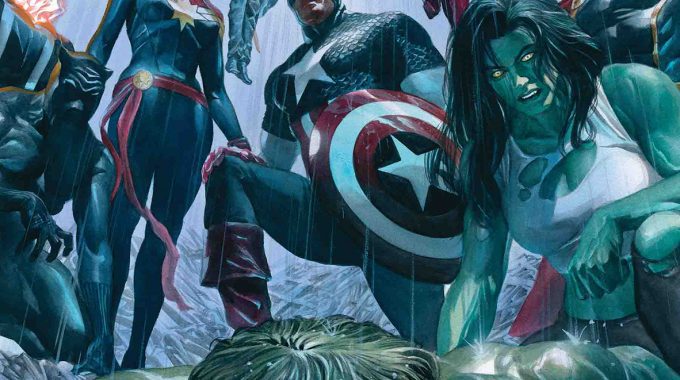 Immortal Hulk has been a series’ that’s been a sleeper hit for some time now. While it’s not making the waves (or sales) of the Jade Giant’s heyday, the Al Ewing written and Joe Bennet drawn series has turned the Hulk into a horror-themed hero, with Bruce Banner’s alter ego rising from the dead every night to exact revenge on the people who killed him (and others). It’s been a fantastic spin on the character, and works surprisingly well, but there haven’t been too many ties to the overarching Marvel Universe. Until Immortal Hulk #7, which finds the Hulk confronting the Avengers.

Seeing as how the Hulk hasn’t really seen them since Civil War II, and seeing as how that’s the event where Hulk “died” (only to be reborn with this new skill set), you can imagine that ol’ Jade Jaws isn’t too pleased to see Earth’s Mightiest Heroes, and you’re absolutely right. This issue features a Hulk that’s far angrier than he usually is, and that means some pretty bad news for The Avengers, who spend a good chunk of the issue getting trounced by him.

What’s great about this issue though isn’t the fact that the Hulk is smashing the Avengers. It’s the fact that Al Ewing’s script focuses a lot on the everyday citizens’ reactions to the catastrophic battle occurring right on their front lawns. Ewing’s issue opens with your typical family desperately trying to remember the evacuation protocols that were put in place for the event of a Hulk attack, and it ends up being one of the highlights of the issue for how effective it is, and makes you reconsider the action that comes later in the book. Yeah, it’s cool watching the Hulk beat down Cap, Iron Man, and the rest, but Ewing’s opening reminds you of the everyday people that get caught in the crossfire of the Marvel universe.

Another highlight of the issue is Joe Bennet’s art, which is pretty spectacular. From the Hulk punching out Thor, to panicked citizens, Bennett can do it all, and makes it look remarkably easy. His take on the Hulk harkens back to Jack Kirby’s classic original, but he gives the monster a remarkably modern look as well. He’s able to convey the rage coursing through The Hulk in ways that are truly amazing, and he’s only going to keep improving the longer he’s on this book.

If you haven’t given The Immortal Hulk a shot yet, you really should consider checking it out. It’s one of the best Marvel titles from their previous relaunch, and it’s the shot in the arm this character needed after being badly mishandled during (and after) Civil War II. It’s the rare series that’s only gotten better as it’s continued, and it deserves your time and cash.