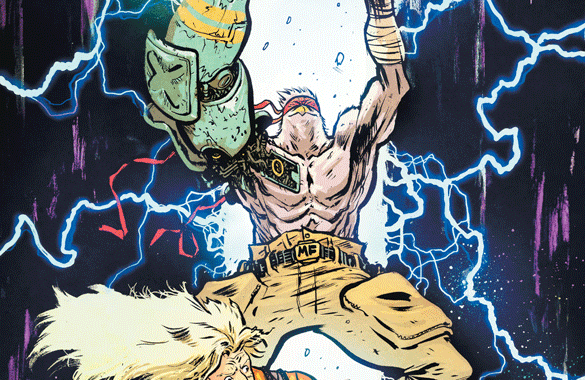 After Extremity, I made the decision to follow writer/artist Daniel Warren Johnson on any book he decided to work on. While I was definitely expecting something crazy for his next project, in no way was I prepared for Murder Falcon. A raucous love letter to all things Metal and Rock, Murder Falcon #1 is a jolt of intensity on every panel, and it’s one of the best debut issues of the year.

Jake is a down on his luck guitar player who hasn’t played in a year. After falling out with his band, he’s aimless, just passing through life trying to get by. But when monsters randomly attack him in his home, he goes for his broken guitar to defend himself, which leads to the summoning of the Murder Falcon, a being powered by Metal who has three desires: fight monsters, drink beer, and rock!

That’s all there is to the plot, and honestly, that’s all you really need. The charm of Murder Falcon is Johnson’s script, which comes from a place of clear love for all things Hard Rock. It’s wish fulfillment in the best way, and Johnson makes Murder Falcon into the type of character you’d love to hang out with. In a lot of ways, he reminds me of music-obsessed version of The Tick, albeit a version that’s a little smarter than that big blue guy. I wouldn’t be surprised if Jack Black ends up voicing him in the inevitable cartoon series.

Of course, Johnson’s not only known for his scripts. After reading Extremity, it was clear that Johnson is one of the best comic artists today, and Murder Falcon makes that even more apparent. Everything that made that series work is ramped up to 11 here, but at no time does Johnson let the crazy kinetic art distract from the story. In fact, he even uses his art to craft some really sad and effective moments that shine a light onto some of the sadder aspects of Jake’s backstory, making Murder Falcon an extremely well-rounded debut issue.

Fans of Extremity will find a lot to love in Murder Falcon, but there’s plenty to love for fans of This is Spinal Tap, Metalocalypse, and bands like Iron Maiden and Black Sabbath. Daniel Warren Johnson clearly loves this genre of music, and it practically bleeds through the page. That enthusiasm is amazingly infectious, and makes Murder Falcon easily one of the best issues of the year.