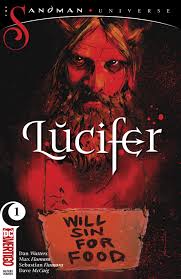 No Vertigo relaunch is complete without a new Lucifer series. The Sandman spin-off returns, with a new #1, a new creative team in the form of Dan Watters and Sebastian and Max Fiumara, and the Lord of Hell depowered and trapped in a world he doesn’t understand.

Stuck in an endless limbo, Lucifer is struggling to remember who he is and why he’s left his domain of Hell. We find out the answers to this mystery by issue’s end, but Lucifer’s struggle to remember makes for a pretty interesting narrative, except for when the issue focuses on John Decker, an LAPD detective who’s dying wife takes up much of his time. A good half of this opening issue is focused on Decker, and it’s not entirely clear what importance his story plays into Lucifer’s adventures just yet.

Despite this, Dan Watters’ script is still pretty great. The mysteries of both Lucifer and Decker are intriguing, even though we don’t know why they’re connect. Going between Decker’s life and Lucifer’s mysterious realm makes for some fun moments, and surprisingly it doesn’t make the issue feel too disjointed. Watters’ depiction of the Lord of Hell is interesting as well, and putting the character at his lowest point makes for an intriguing and compelling story to follow.

On the art side of things, Sebastian and Max Fiumara have a style that’s very much the Vertigo “house style”, which means that this book looks pretty damn spectacular. The Fiumara’s have a lot of fun depicting the world that Lucifer finds himself trapped in, and their depiction of an emaciated and raving mad Lucifer is striking and at times, pretty comical. There’s not a lot of action in this opening issue, but so far the pair make for some of the best art to come out of the Vertigo relaunch so far.

As someone who’s only read of handful of Lucifer comics, I was a little wary jumping into this new series. However, Watters and the Fiumaras have crafted a cool and easily accessible entry point for casual readers like me, and created a first issue that has me curious to see what comes next for the Fallen Angel.