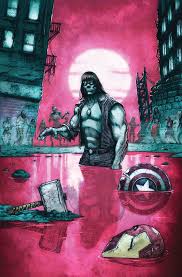 Just in time for Halloween, Marvel’s digging up their classic Zombie character for Marvel Zombie, a brand new one-shot from W. Maxwell Prince and Steffano Raffaele. Focusing on the classic Marvel Horror character and a small band of Marvel Heroes that are leading a fight for survival, the special makes for an uneven, but ultimately enjoyable story.

Spider-Man, Daredevil, Falcon, Black Widow, Moon Girl, and Hawkeye are all that remains of Marvel’s heroes. Following a massive Zombie apocalypse, they struggle to survive in a world that is far beyond what they’ve known. At the same time, Simon Garth, the Zombie, wanders the world, an outcast to his fellow undead due to his inability to be “one of the horde”. But when a young boy comes across the same amulet that Simon wears, the boy learns that he can control the creature, and that the creature is the key to ending the zombie plague for good. But will the boy sacrifice his new friend for the greater good? Or will he sacrifice the world for one person?

I won’t spoil the ending, but I will say that Marvel Zombie has some pretty bold story moments, and while I didn’t necessarily like the ending, the fact that this is essentially a What If story makes that conclusion sit a little better with me. W. Maxwell Prince’s script is really solid, setting up the rules of this world and a new characterization of Simon Garth in a quick and effective way. At no point are you bogged down with exposition about how this Marvel universe came to be, nor does he waste time on things that don’t really matter to the script. While I found the scenes with the remaining heroes to be more engaging than the Simon Garth ones, there was enough here that I kind of wish this was more than just an ongoing.

I’ve never seen Steffano Raffaele’s art before, but after this issue I hope he gets some more Marvel work. His style instantly makes you think of the classic Marvel Zombies series, and his detailed zombified Marvel characters makes for some great (and horrifying) depictions of characters you love. Raffaele’s also got a great command over the action sequences in this book too, with the new “Defenders” taking on a small zombie horde being the highlight of the book.

If you’ve got a little extra spending money in your comic budget this week, then Marvel Zombie would be a great add on. It’s a solid, done-in-one story that doesn’t overstay it’s welcome, and it’s perfect for