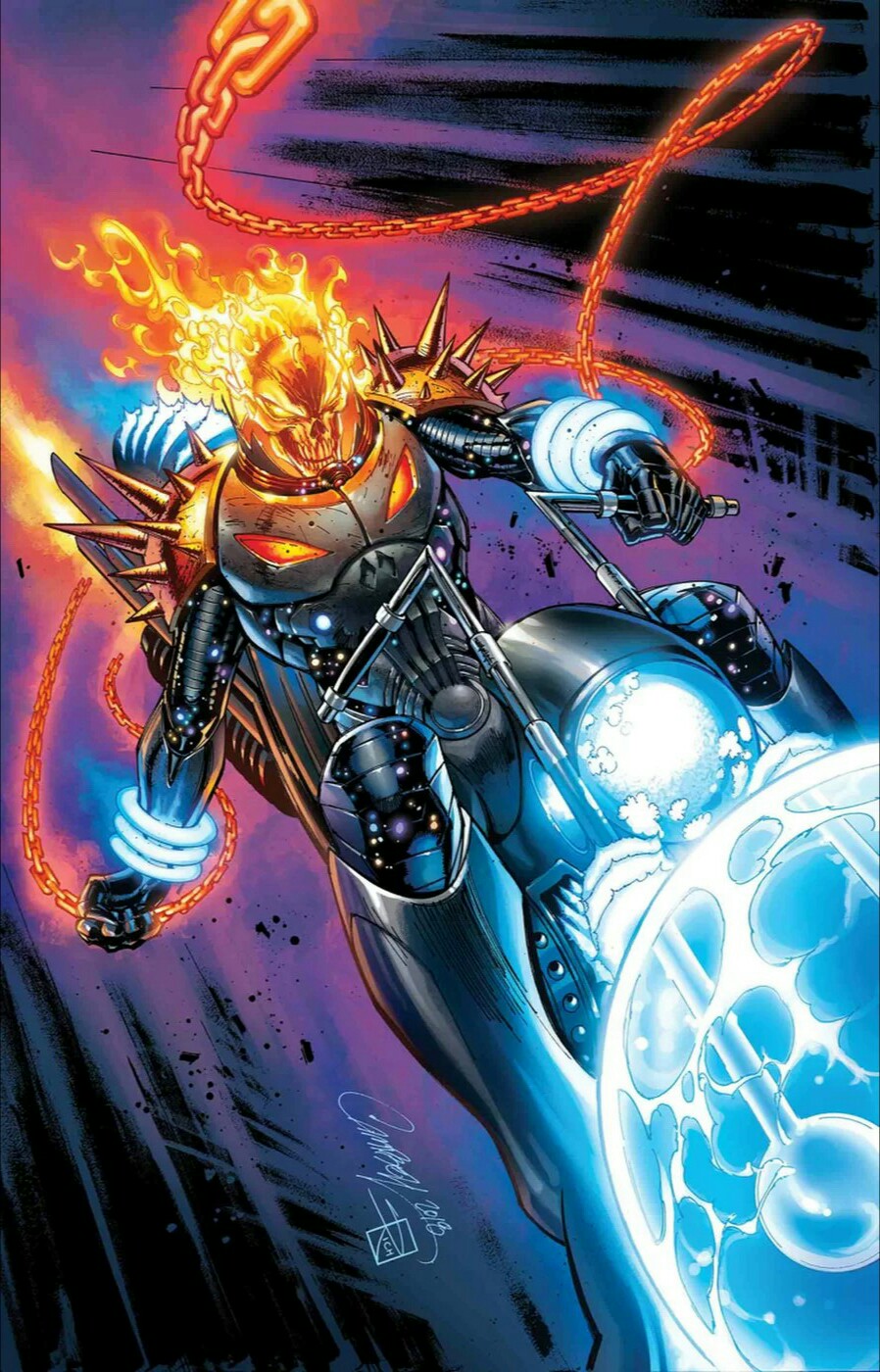 “The Punishing Spirit of Vengeance of the Cosmos”

It’s always tough for the big two to introduce new characters and have them stick. However, Marvel’s had some pretty big success, starting with Kamala Khan’s Ms. Marvel, Spider-Gwen, and (unfortunately) Gwenpool. But for my money, the coolest new character they’ve introduced in some years is none other than the Cosmic Ghost Rider.

For those unaware, the Cosmic Ghost Rider made his first appearance in Donny Cates and Geoff Shaw’s Thanos run, which stands as not only one of the best runs of the last year, but also of the last ten years. Cates and Shaw built up to the reveal of this former Herald of Galactus’ true identity masterfully, and I’m totally going to spoil it here, so if you don’t want to know, I highly recommend that you run out to your local comic shop and pick up the trade before going any further.

In the heroes of the Marvel universe’s last stand against Thanos, Frank Castle (aka The Punisher), is killed in battle. Enraged at having being defeated, he sells his soul to Mephisto and becomes the new Ghost Rider. Unfortunately for Frank, when he returns to Earth everyone is dead and Thanos is gone. Years pass, and the man known as Frank Castle eventually starts to lose his mind, until a desperate Galactus comes to him seeking aide. Agreeing to the devourer of world’s terms, the already mega powered Ghost Rider Frank is given a cosmic upgrade, but the herald turns against his master after Thanos defeats Galactus and offers him the chance to go after even more evil in the galaxy.

Yeah, that’s a lot to condense down into a paragraph, and it all certainly sounds pretty heavy and dramatic. But surprisingly, the Cosmic Ghost Rider is a pretty fun character that isn’t even close to being as dour as both his namesake and his former persona. Cates crafts a character that’s the perfect balance between the off the wall antics of Deadpool and the badassery of a character like Wolverine, and has such an attachment to the character the he not only starred in his own spin-off miniseries, but will be appearing in Cates and Shaw’s upcoming Guardians of the Galaxy relaunch too (and another spin-off miniseries as well).

For as successful as Cosmic GR is in comics, he still hasn’t broken through to the mainstream like Spider-Gwen or Ms Marvel have. Hell, he doesn’t even have a POP Figure yet (though I check weekly). I’m holding out that he’ll be a surprise DLC or costume for either Ghost Rider or Punisher in the upcoming Marvel: Ultimate Alliance 3 that’s coming to the Switch (assuming one or both of them are in the game, of course), but for now I’ll just have to keep patiently waiting for something, anything that features the best new Marvel character since Spider-Gwen.