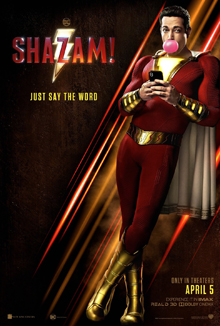 A character like Shazam is one that I never thought would get a solo movie, especially before characters like The Flash, and yet Shazam!, starring Zachary Levi as the titular hero and Asher Angel as his teenage alter ego Billy Batson is here, and like Aquaman before it, marks a distinct tonal shift in the Warner Bros stable of DC films. Watching this after Batman V Superman would probably give someone tonal whiplash so hard it would snap their neck, and while the David F Sandberg film has some problems, all in all it’s a really fun film that will certainly appeal to families who are looking for something a little lighter than other superhero films.

Billy Batson is a troubled kid who’s been in and out of foster homes for his entire life. After a recent run in with the law, he’s transferred to yet another family, and despite the kids and foster parents being extremely welcoming, he still can’t trust them. But after saving one his foster brothers from a group of bullies, he’s transported to the mystical rock of eternity, where the Wizard Shazam (Djimon Hounsou) bestows upon him the ability to be a great hero, which he’ll need to take on Dr. Sivana (Mark Strong), who’s unleashed the seven deadly sins upon the world.

Pitched as “Big with superpowers”, Shazam!‘s heart is with Zachary Levi, who brightens up the screen every time he shows up as the superhero. The opening moments of the film are a little slow and goofy (as a character of the 1940’s, Shazam has a lot of weird old-timey villains and themes), but the movie really clicks once Levi, in all his wide-eyed “holy crap” expressions and surprisingly jacked glory, shows up and starts investigating his powers. Levi perfectly captures what a teenager would feel if he suddenly found himself with the ability to shoot lightning out of his hands or run super fast, and I have the feeling that he’s going to be a major star should Shazam! be as successful as WB is hoping it will be. His alter ego Billy Batson, played by Asher Angel, is good as the constantly on the run foster kid, and has a very unexpected emotional moment towards the end of the film, but he’s easily overshadowed by Jack Dylan Grazer, who plays Batson’s foster brother Freddie Freeman, a walking encyclopedia of the superheroes who inhabit the universe they live in.

One of the aspects that works really well in Shazam! is that it feels like an actual part of the DCEU, which is ironic because there’s very little (if anything) that really connects it to films like Justice League or Aquaman. References to events of previous films abound, but there’s no heavy handiness to them to them at all. Newspaper headlines of Superman’s return in Justice League adorn Freddie and Billy’s room, but they primarily serve as background settings (there’s no cameos of Justice League members, either). Despite featuring some city-wide battles between two characters who can fly, Shazam! feels like a pretty small film when compared to other films from Warner Bros. For the first time, the DCEU actually feels kind of connected, which is odd because neither the studio nor the director have stated if Shazam! exists in the same film universe as the ones we’ve seen before.

If you’re looking for a solid actor to portray a villain, Mark Strong is usually a safe bet, and he’s very reliable here as Dr. Sivana. Black Adam aside, Shazam doesn’t have a very deep bench of great villains, but the changes made to Sivana make him a fairly credible threat, even if his plan doesn’t go much beyond achieving the ultimate power that he feels was denied him as a child. Strong doesn’t really need to do much except look intimidating and be the straight man to action around him, but he’s always great to watch, and there’s a hilarious bit between him and Shazam that is one of the highlights of the film.

The moments where Shazam! shines are where the character and his friends attempt to learn his powers, which allows director David F Sandberg to have some fun skewering the rules of superhero origin films. We all know that Batson is going to learn to use his powers responsibly by the end of the film, so we can go along with him using his appearance to score beer or using his powers to busk on the streets of Philadelphia to earn some cash. These moments are ridiculously fun, and Levi is so charming that it makes up for some of the film’s flaws, which are namely the pacing and the fact that Sivana’s Seven Sin goons are pretty generic looking. Shazam! isn’t the slam dunk that the DC films need, but like Wonder Woman and Aquaman, it’s another sign that the studio is learning from their mistakes of films past, and are on the road to making stronger films.