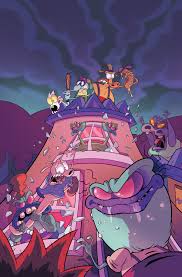 As a zombie plague ravages the people of O-Town, Rocko is actually enjoying life. Holed up in his house with his dog Spunky, he’s finally free from people and their annoying technological gadgets. But as his supplies run low, Rocko realizes that he’s going to need to venture out at some point for more food and water, and that means trying to survive against the monstrous hordes of zombies that are right outside his door, pounding to get in.

While not nearly as graphic as Archie Comics’ Afterlife with Archie, Rocko’s Modern Afterlife still has some surprisingly adult moments peppered throughout. However, a lot of it is like the show, where those jokes are likely to fly over younger reader’s heads. Speaking of the show, Anthony Burch’s script is pretty in step with the type of episodes you’d remember from your youth. It’s so on point that it’s impossible to read it and not hear Rocko and Heffer’s voices in your head.

Like Burch’s script, Mattia Di Meo’s art is perfectly in step with the style of the cartoon. Many times with licensed comics based on cartoons, the style of the artist is too different from the show it’s based on, which causes a disconnect with the tie-in. That’s not the case here, as Di Meo’s characters look exactly like they do from the cartoon, albeit with some zombiefied changes. In fact, there were some panels that almost looked like stills from the cartoon.

Fans of Rocko’s Modern Life would be well-suited picking up this series, as it offers a fun horror-spin on a character that I feel like gets easily forgotten in the Nicktoons stable of series. Burch and Di Meo have a really fun debut issue that works wonderfully in sync with the series it’s based on, and it should make for a strange, but fun little miniseries.