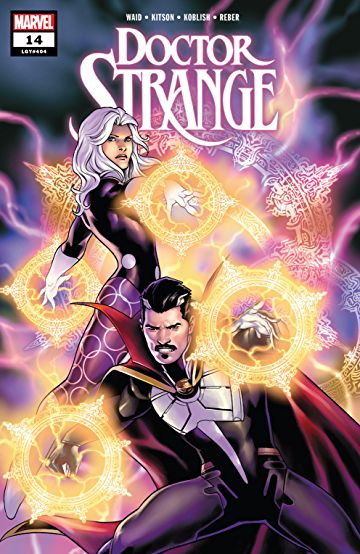 Mark Waid’s run on Stephen Strange has been a lot different from others, mainly because it’s been less about Doctor Strange facing off with magical threats, and more focused on the Sorcerer Supreme fighting against cosmic threats. It’s a weird decision, but Mark Waid and Barry Kitson’s Doctor Strange #14 has a lot of fun with this idea by giving Stephen Strange his weirdest title yet: Herald of Galactus.

There’s no greater cosmic threat than Galactus, devourer of worlds, but he’s currently trapped in the magical realm, feasting on the different magics that live there. Of course, that’s not enough to keep Galactus at full strength, so in order to protect the realm of magic and the creatures that live there, Strange agrees to become Galactus’ makeshift herald and find him a planet that will fulfill Galactus’ hunger. Of course, Stephen is on the look out for a planet that’s empty of any form of life, which is easier said than done, and Clea’s attempts to rally the remaining realms of magic to prepare for Galactus aren’t going very smoothly either.

Mark Waid has worked on probably every major comic book character at this point, so it’s no surprise that his script is pretty rock solid. What is a surprise is how this idea has never been thought of before, but then again, how many times would someone think to put Galactus in the realm of Magic? It’s a great idea that someone like Waid could only pull off, and it’s bolstered by great characterizations and awesome stakes that really make you wonder how it’ll all end up by the storyline’s end.

Barry Kitson’s style is a little more animated than previous artists’ work on the series, but it’s still really great. Within the first few pages you’ll see Kitson go really wild with different magical realms and aliens, and Kitson really has a blast working on this book. Mark Waid can work wonders with literally any artist at this point, but he and Kitson seem to have something truly unique here.

Doctor Strange may not be making the kinds of waves that other Marvel titles are making, but it’s been a pretty solid sleeper hit of a book, filled with broad ideas that many comic readers wouldn’t think would be within it’s pages. Putting Stephen Strange into cosmic scenarios like this wouldn’t ever be my first idea to do with the character, but it’s a really great one that puts Strange just out of his element to make you wonder if he can make it out on top.