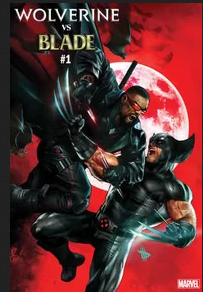 Lots of times comics fall through the cracks. Whether a series is cancelled too early or it’s a one shot that’s been lost in a drawer somewhere, many times whenever there’s a comic coming out that seemingly has no real reason for being released, that’s the case. And it’s probably definitely the case for Marc Guggenheim and Dave Wilkin’s Wolverine vs Blade one shot, a comic that feels like a relic from the mid-00’s brought to today.

This issue finds Blade and Wolverine teaming up to fight some vampires, fighting them solo, then fighting each other before taking on a bigger threat. It reads exactly like every other superhero “vs” book you’ve read before, except this time the fight lasts about 2 pages instead of half the book. There’s nothing inherently bad about this issue, but there’s also nothing in here that makes it a must read. Guggenheim’s script reads like something from his Blade run from 2006, and the fact that Wolverine appears exclusively in his X-Force costume doesn’t help matters either.

Dave Wilkin’s style is a mixture of Clayton Crain and Stjepan Sejic, and it works pretty well for the action scenes, but not so well when Wolverine and Blade are investigating the new Vampire threat separately. Like Guggenheim’s script, Wilkin’s art looks like it’s been taken from the mid 2000’s and plopped onto the modern rack. It’s certainly solid art, but nothing that is as cool as it should be.

Wolverine vs Blade doesn’t really seem like it’s going to matter at all in the grand scheme of the overall Marvel universe currently, and in all likelihood it was probably found in a file on someone’s computer who realized that they could release this book and get some cash for it from fans of either character. As it stands right now, if you HAVE to have everything featuring Wolverine or Blade (I’m sure there’s some of you out there that do), you could do worse than Wolverine vs Blade.