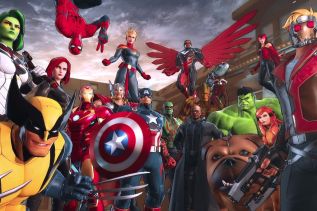 The original Marvel Ultimate Alliance game is one of my all time favorite video games, so the news that the Nintendo Switch would be getting Marvel Ultimate Alliance 3: The Black Order as a system exclusive was extremely exciting to me. After a decade without this type of game (and after a lackluster sequel was released), I was overflowing with hype around the game. Would it rekindle the feeling I had when the first game was released? Would I find myself doing multiple play throughs with different team combinations like the first game? As I near the end of the story mode of the game, I can confidently say that all signs are pointing to yes.

Telling their own version of the stories from Infinity Gauntlet and Avengers: Infinity War, Black Order finds the heroes of the Marvel Universe teaming up to take on Thanos and his Black Order before the infinity gems are collected and used for Thanos to wipe out the galaxy. Bouncing from outer space to Wakanda to the Dark Dimension, the game features a who’s who of Marvel characters both playable and not, with even more to come in DLC packages (the first of which being a free one that brings Cyclops and Colossus into the playable character realm).

Black Order plays exactly like the previous Ultimate Alliance games, which is easily the highest honor I can give this game. If you take the dungeon mashing of Diablo and give it the character roster of a Lego Marvel game, you have somewhat of an idea of how the game plays. The sheer amount of characters in this thing is insane, and while it doesn’t have the Fantastic Four in it just yet, the fact that you can put a team of characters like Spider-Gwen, Drax, Black Panther, and even Elsa Bloodstone of all people on one four person team is pretty damn impressive. Every character has a class type and special set of moves, but the real fun is putting together combos with two or more of your team and lighting up the screen with your power boosts. My current team of Spider-Man, Wolverine, Hulk, and Ghost Rider (aka the “New Fantastic Four”) is pretty beastly, and leveling them up is neither a slog nor too easy.

Of course, as good as Black Order is, it’s got some problems that make it shine a little less than it’s older counterparts. For one, there’s a huge lack of costumes and character customization that the previous games had. While you can augment each character on your team to buff up their stats and abilities, that’s really as far as the customization goes. There’s no alternate costumes for this installment, outside of “skins” that really just change the color template of your hero, and it really only works for Hulk, who’s skin tone goes from green to grey. The camera issues that plagued the original games are also back with a vengeance in this one, something that is pretty frustrating when you consider how far video games have come since the last installment of this franchise came out.

Aside from those two gripes though, Black Order is a ton of fun, and if you own a Switch you should really consider picking it up. It’s quick, easy to jump into, and chock full of extra material to keep you busy after you beat the game. Hell, the Infinity Trials alone could have been their own game, they’re that fleshed out. Marvel Ultimate Alliance 3: The Black Order is more than just a nostalgia trip for me, it’s reminded why I love both video games and the Marvel universe.