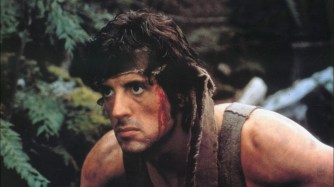 “They Drew First Blood, Not Me”

As I write this, I’m rewatching First Blood, mainly because Last Blood, the “final” movie in Sylvester Stallone’s Rambo franchise is soon to be released. While 2008’s John Rambo was a perfectly fine capper to Stallone’s other famous franchise, the studios have decreed that we need a fifth film, and we’ll have to see if it was truly necessary or not. But as I watch John Rambo struggle with acclimating to civilian life in the most over the top way, I’m struck by the fact that this character that is so damaged, so out of his element in regular every day life, quickly became a symbol of American military and might, despite his first film being very much the complete opposite of those ideas.

It’s a very well-known secret that at the end of David Morrell’s novel that First Blood is adapted from that John Rambo dies at the end of the story. And watching Stallone’s movie through that lens definitely makes it seem like Rambo will die at the end of the film version. After all, this is a movie about a severely damaged individual who is traumatized by the war he was drafted into, so much so that the very inkling of him being placed in protective custody (by a police chief who is clearly abusing his power, no less) causes him to lash out in an extremely violent way, starting a chain of events that could have been very easily avoided. John Rambo is a victim of the horrors of war in the first film, but by the second and third, he’s become a symbol of US military might. It’s an odd turn of events, until John Rambo arrives.

The fourth film in the franchise is arguably the best middle ground for the character. It has the slight philosophical dealings with war of the original First Blood, but also the extreme (and gory) action of First Blood Part II: Rambo and Rambo III. But it also showcases the toll that the war has taken on John Rambo. He’s been prepared and trained to kill since joining the army, and after his war was over, what was left for him to do? Go out into the jungle and collect snakes. Colonel Sam Trautman, Rambo’s commanding officer, is arguably the only family the character has had, and he’s gone now. Rambo himself has tried to live a life of peace, but the violence that started his adult life still has a hold on him, and it’s a massive and unfortunately core part of his life and who he is.

In a lot of ways, the Rambo franchise has a lot of similarities with the character of the Punisher, and the reasons why I’m fascinated by both characters is the same: they’re products of the military, and more specifically, are examples of how war can cause irrevocable damage to the human mind. Both Frank Castle and John Rambo have seen the absolute worst of humanity, and have had their rational selves stripped to the core to fight for what they believe in. But they’re also a stark reminder of what can happen when the military training goes too far, and the humanity of a person is forgotten. That’s a thing that the Rambo franchise lost until the fourth movie, and I hope that the fifth film doesn’t do away with that idea.