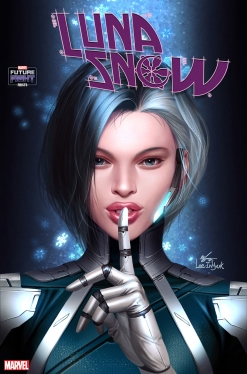 Marvel’s Future Fight mobile game is one of the hottest games on mobile devices, so naturally the publisher wants to try and use that publicity to get players to read some of their books. Enter Future Fight Firsts, a new series of one-shots focusing on some of the new characters introduced in the game. The latest special puts the focus on Luna Snow, the K-Pop superhero with the powers of ice manipulation.

As someone who’s never played any Marvel mobile game, I didn’t really know what to expect from this special, but I have to give credit to writer Alyssa Wong for making this pretty new-reader friendly. Of course, that’s to be expected if the issue is supposed to draw in fans of the mobile game, but at the same time, it could’ve been incomprehensible, or carried over rom the previous specials in the line. Wong’s depiction of Snow is really sympathetic, and she comes through as a pretty solid hero that could easily stand along the older, more well-known Marvel heroes.

Gang Hyuk Lim’s art is pretty spectacular in this issue, and his manga influenced style makes Luna Snow stand out from the other titles on the shelf. Lim’s style is full of really great and stunning splash pages that make for a pretty special issue, and at the same time, he’s able to make the smaller moments with Snow just as effective as the action sequences.

Fans of the mobile game will definitely find an easy to pick up comic with Luna Snow, and I’m pretty surprised to say that I found myself really enjoying this issue as well. While it wouldn’t necessarily be my exact type of book to read, Luna Snow is a pretty cool character, and I’d definitely be down with seeing her interact with more of the “main” Marvel universe.