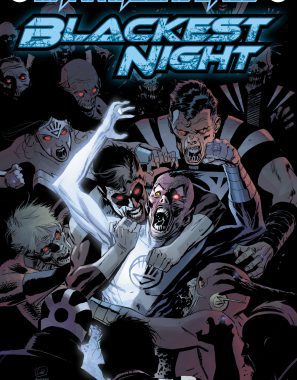 It’s time to jump into the Dark Multiverse of DC once more, and this time we’re focusing on an event that’s a little more recent than the others: Blackest Night. Tim Seely and Kyle Hotz’ take on the Green Lantern event is just as dark as the previous specials, but it’s lacking a certain sense of plot and pacing that the others had.

Instead of giving up the power of the White Lantern like he did in the events of the actual Blackest Night, Tales from the Dark Multiverse‘s special asks “what if Sinestro kept that power for himself?” Well, the answer to that is that it causes the character to be infected by the Black Lanterns, but since he’s currently wearing a White Lantern ring, half of his body is infected and zombified, and the other is slowly trying to fight off the infection. Traveling the cosmos, Sinsestro comes across Lobo, who’s delivering Dove to a prison planet for a mysterious benefactor. Naturally things go awry from there, leading to a spiral of events that make an already dark story even darker, and create a world far more depressing than we could ever imagine.

I’m a big fan of these “what if “ types of stories, and while Blackest Night is certainly a solid entry in this run of Dark Multiverse specials, it’s not nearly as engaging as the Knightfall or Death of Superman ones that came before it. That may have to do with my personal attachments to those two stories, but Seely’s script is kind of at a disadvantage by starting off with almost all of the major DC heroes already destroyed. While it’s neat to see these characters all zombified, removing a lot of them off the board at the beginning of the story leaves us with very few “regular” characters to care about, even thought Seely does a great job with his characterizations of the remaining heroes.

The art, however, is pretty damn awesome. Kyle Hotz’ style is eerily reminiscent of Kelly Jones, and it fits perfectly with this type of story. Hotz’ expressive faces are used expertly in this issue, and he really goes nuts with the gross and inhuman zombie effects on the well-known DC heroes. It’s art that’s very effective and suits the story very well.

You always run the risk with certain “What If” type stories not being that great, and while Blackest Night is certainly not as good as the two that came before it, it’s still pretty solid, and will probably appeal to fans of Green Lantern who devoured that original story. As it stands on it’s own, it could’ve been better, but it also could’ve been a whole lot worse.