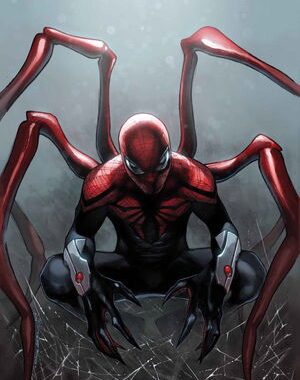 “Requiem for An Octopus”

Years ago, Dan Slott attempted to do the impossible: make a lasting change to Spider-Man by having his body taken over by the mind of Doctor Octopus. It shouldn’t have worked. It couldn’t have worked. But it did. The Superior Spider-Man made a huge impact in the world of Spider-Man, and those results are still felt today in the world of the wall-crawler. Sure, Peter’s been running around back in his body for a few years now, but Doctor Octopus has also been active as the Superior Spider-Man, inhabiting one of the few Peter Parker clone bodies that The Jackal left intact after the events of “Dead No More” (I’d do a full recap, but no one wants to read that). Otto’s been so busy, in fact, that he had his very own ongoing series following his exploits for the past year.

…or at least, he did. The most recent issue of Superior Spider-Man‘s second volume is the last, and it does what a lot of us were worried it would do: revert Otto to his former self in the cheapest way possible. Look, I’m not naive enough to think that Otto would be in the body of a Spidey clone forever, but I was expecting that whatever scheme Marvel came up with to get Otto out of his Spider-heroics would have been a little more thought out than what we got.

For starters, and yes, I’m going to SPOIL some of this issue, the transformation happens off panel, a move that is supposed to have the reveal mean something, but really just adds to the confusion of the story. Believing that he needs to fully embrace his inner evil to take on an alternate reality Norman Osborn (again, if I recapped it in full I’d need four pages), Otto gives up the abilities and morals he’s learned as a hero and instead reverts to his former pudgy self. Sure, I’ll believe that Otto’s mindset before his turn was more ruthless, but to imply that he wouldn’t be a suitable enemy to this version of Osborn if he kept the physique of a Spider-Man is the biggest stretch imaginable.

THEN, the bigger thing that really sticks in my (and I’m sure other Spidey fans) heads is that the being responsible for turning Otto back is none other than Mephisto himself.

Yep. Mephisto. The character behind one of the worst moments in Spider-Man history is now involved in this majorly disappointing end to a truly great and interesting character development (now that I think about it though, it does make sense for Mephisto to be a part of this, since that’s kind of his thing). All the work that went into making Otto Octavius into the Superior Spider-Man is undone with the wave of Mephisto’s hand.

Since his debut way back in 2013, the work was being done to truly make Otto turn to the light. He made mistakes, was misguided in his early efforts, but over time started to learn what it means to be hero in his own way, and it created true growth in the character. While he became a hero, it also solidified Otto as Spider-Man’s greatest enemy. Sure, Green Goblin killed Gwen Stacy, and Venom knows Spidey’s secret identity, but neither of them took over Peter Parker’s life for their own.

The undoing of Superior Spider-Man is a stark reminder of the fact that nothing ever really changes in the world of mainstream comics, and if they do, it’s extremely rare. Otto was always going to change back to his evil ways there was no doubt about that. But the final issue of this series took the easiest way out, and in doing so, leaves a giant asterisk on the end of the saga of Otto Octavius.