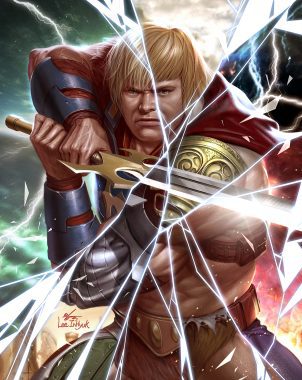 If DC is known for one thing, it’s their multiverse. From comics to the live action series on CW, the DC Comics Multiverse is a well-known and well-trodden territory for many creative teams, but now it’s time for something a little different. We’ve seen plenty of versions of the DC superheroes and villains pop up in different multiverse tales, but what about a cartoon series, like, well…Masters of The Universe? It’s a weird premise for sure, but Tim Seely and Dan Fraga’s new miniseries He-Man and The Masters of the Multiverse is a big love letter to world of Eternia, and it’s a pretty fun read to boot.

Throughout the multiverse, different versions of He-Man are being struck down by a dark foe. This mirror image He-Man is not the savior of Eternia, but the destroyer, and on his world, Keldor is the hero (but he’s not Skeletor yet). In order to prevent the destruction of the entire Eternian Multiverse, Keldor is visited by different versions of He-Man (including a hyper-cartoon version and one that looks an awful lot like Dolph Lundgren) who believe that Keldor is the key to stopping the evil He-Man before it’s too late. The only problem is that they have to find him in the multiverse now….

One of the key aspects of Masters of the Multiverse‘s appeal is Tim Seely’s script, which takes a bunch of different well known versions of the Eternian and his friends and enemies in fun ways and mashes them together. Seely’s definitely having a ton of fun writing this series, and it really shows in the script. Every aspect and iteration of the character is shown here, and it makes for a very enjoyable read.

Dan Fraga’s art is a fantastic fit for Seely’s script, and this opening issue contains some truly great panels and sequences. While my favorite, Skeletor, is unfortunately not featured enough, what we do see from Fraga gives me a lot of hope for the villain, and like Seely’s script, Fraga’s art shows that the artist is having a lot of fun showing off new versions of the classic cartoon.

He-Man and The Masters of the Multiverse is definitely a weird comic (hell, it might even be the weirdest comic on the shelf), but it’s a ton of fun that will appeal to He-Man fans and non-He-Man fans alike. Like the property it’s based on, there’s a few goofy moments in this book, but by and large it’s a lot of fun, and I’m really looking forward to the rest of the series.