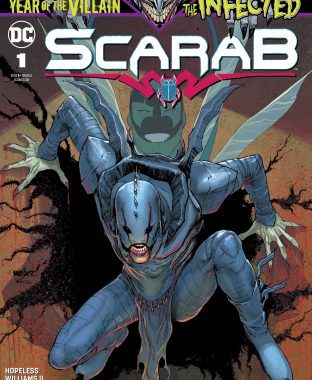 As DC’s “Year of the Villain” continues, more and more heroes are falling to The Batman Who Laugh’s virus, and since DC only has so many titles that can run these storylines, they’re giving some of these characters their own specials. What makes The Scarab, from Dennis Hallum and Freddie E Williams II, stand out from the other specials in this line is that we really get into Jamie Reyes’ mindset as he struggles with the Batman Who Laughs’ virus, and that adds a sense of tragedy to the book that the other specials haven’t had.

Jamie Reyes knows something is up with the Scarab tech that gives him his Blue Beetle abilities, but he also doesn’t care. He’s become more brazen in every aspect of his life, from transforming into the Blue Beetle outside in front of people to “borrowing” some of Ted Kord’s tech, Reyes is acting way out of character as of late, and his friends are starting to notice. However, Reyes is still going to be a hero, but when he goes up against an enemy, the Batman Who Laughs’ virus takes over, and the Blue Beetle is no more….and in his place is The Scarab!

As I mentioned before, Dennis Hallum’s script really gets into Reyes’ and his friend’s mindsets, and that adds a lot of emotional weight to this story. While Reyes may not be acting like he cares much about what he’s doing, the inner monologue that Hallum writes really paints a different picture, and really makes you feel for Reyes. We want to see him succeed, but also know that the Batman Who Laughs’ virus is VERY strong, and it won’t be easy to cure him.

I’ve been a fan of Freddie Williams II’s art since the Batman: Arkham City tie-in comics he drew, and his art is even better in this issue. From Blue Beetle’s transformation into the Scarab to Jaime’s friends following him, there’s a ton of fantastic work from Williams II in this special, and it’s just another stellar piece of work for the artist’s already vast portfolio.

While it’s probably not completely necessary, The Scarab is a pretty solid one and done comic, and it’s easily the best of the Year of the Villain specials that the publisher has been putting out. While it’s still strange that there’s no main series to follow for this DC mini event, being able to pick and choose the characters and storylines you want to follow is a nice change of pace.