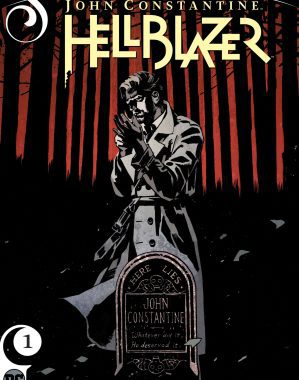 After making a brief detour in the world of the DC Universe, John Constantine is back in a new Hellblazer series under the more adult oriented Black Label/Sandman Universe line of DC comics. With writer Si Spurrier and artist Aaron Campbell as the creative team for the mage’s new series, there’s a lot of curiosity on if Constantine’s new title can live up to his former Vertigo days, and so far it seems like it just might.

Returning to London after his adventures overseas, John Constantine quickly finds himself smack in the middle of a bunch of new Supernatural problems. Running afoul of some local drug dealers, he’s quickly forced into helping them get rid of the strange spirits ruining their business in the local park. Naturally, there’s more to this than just a simple exorcism, and now Constantine is embroiled way more than he ever wanted to be.

One of the things that Si Spurrier’s script does really well is it immediately sets up Constantine’s new supporting cast efficiently. In just a few pages, Spurrier brings in a new supporting cast member in the form of Nat, a bad ass door women that Constantine meets at a local pub, and the head of the drug gang that hires Constantine is pretty impressive too. Spurrier’s take on the character is also really great, evoking the classic feel of old school Vertigo Constantine with the popular live action take from actor Matt Ryan as well.

Aaron Campbell’s art adds an effectively freaky look to Constantine, and while it’s not as detailed as we’ve come to expect from most recent comics, it’s still plenty moody for this series. Campbell’s ghostly designs are very unsettling, adding a strange look to the proceedings, and he makes the streets of London look appropriately spooky and grimy as well.

Hellblazer is definitely the return to form that many long-term Constantine fans have been waiting for, and all signs are pointing to it being a worthy successor to the original series. There’s more eyes on the character now than ever before, and while I wonder how many of them will be turned off by the series’ tone, I’m hopeful that many more will find something really cool and unique with the new Hellblazer.