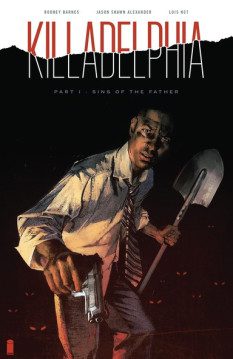 Is there a better title for a book than Killadelphia? Rodney Barnes and Jason Shawn Alexander’s new Image title is a pretty solid horror book, but honestly the whole thing could have been garbage and I’d still recommend it based on that killer title. But luckily this is a very solid introduction to the world Barnes and Alexander have created, and the horror meets detective story is a very interesting spin on both Vampire stories and Police Procedurals.

Detective James Sangster has been investigating mysterious deaths of homeless citizens of Philadelphia for some months now, and they all have a similar trait: they’re completely drained of blood, and have mysterious human like bite marks on their bodies. After he goes missing and is presumed dead, Sangster’s son starts to piece together what happened to his father, and once he realizes it’s the work of vampires, attempts to finish what his dad started.

While using flashbacks could have made Killadelphia a little difficult to follow, Rodney Barnes actually uses them to great effect here. Large chunks of the story are from Sangster Sr’s point of view, and it really sets up the melding of the real world police work with the supernatural vampire storyline in a really interesting way. While we don’t get a lot of information on the history between Sangster and his son, I get the feeling that will be fleshed out in issues to come.

On the art side of things, Jason Shawn Alexander is probably the best artist for this type of book. His moody, dark atmospheric art brings a lot to Barnes’ script, and it’s really difficult to imagine this book looking anything other than how it looks here. Alexander has a creepy vibe to his pencils even when he’s doing superhero stuff, so giving him a vampire book is a no-brainer.

Killadelphia is a pretty rock solid introductory issue that doesn’t waste time needlessly explaining the history of Vampires in the city, or spending too much time on the family dynamics between Sangster and his son. It’s a premise that is able to get you on board relatively quickly, and I’m really interested to see where it goes next.