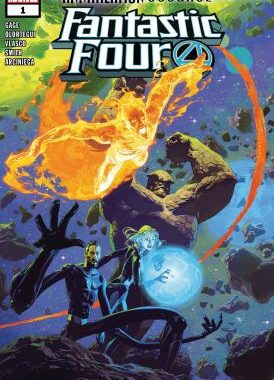 Marvel’s latest Annihilation event, Scourge, isn’t doing the typical miniseries event roll out. Instead, the story of the new threat from the Negative Zone is unfolding through a series of one-shots, the first being Annihilation Scourge: Fantastic Four, from Christos Gage and Diego Olortegui.

Picking up after the events of Annihilation Scourge: Alpha, the latest one shot finds Marvel’s first family answering a distress call from the Negative Zone. After entering the new dimension, Reed Richards and his fellow teammates come across the evil “Cancerverse” versions of themselves. The fight is already going to be a challenge, but with Johnny Storm also struggling against his trauma from being in the Negative Zone for two years, it’s going to get a whole lot more difficult.

The biggest strength this issue has going for it is Christos Gage’s focus on Johnny Storm’s PTSD from his time in the Negative Zone. For happening years ago in our time, it really probably wasn’t that long ago for Johnny, and it seemed like a lot of creative teams completely forgot about it after Jonathan Hickman’s run ended years ago. But it adds an interesting hook to Gage’s script, and even though it’s kind of put on the back burner for the middle part of the issue, there’s still some pretty great character work being done with him in this issue.

Diego Olortegui’s art is very impressive in this issue, and while I’ve never seen his work before on a Marvel title, I expect this to be a big step up for him at the publisher. From the solid character design work to the out there visuals of the Negative Zone, Olortegui is more than up for the task of this issue’s script needs, an left a pretty good first impression on me.

Both a solid stand alone story and a good next chapter of the overarching story, Annihilation Scourge: Fantastic Four is a solid comic that will satisfy both fans of the family and those looking to get the entire Scourge storyline. While it would have been neat to fully hone in on Johnny Storm’s PTSD in regards to the Negative Zone, this is still a good issue that will please all types of fans.