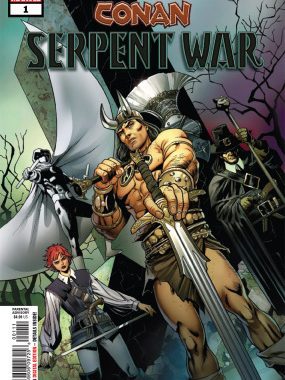 Marvel has been getting their worth out of the Conan The Barbarian license, but they’re been pretty hesitant to use any of Robert E Howard’s other creations. Until now. Serpent War brings Conan, puritan monster hunter Solomon Kane, the fighter Dark Agnes, and….Moon Knight together in a new story that’s being pitched as a big Conan event. However, there’s a lot of set up in Jim Zub and Scot Eaton’s first issue, and not all of it has to do with the character backstories either.

James Allison has lived many lives under many names, but is now at the end of his time on Earth. Believing that the forces of the snake god Set are planning another attack on humanity, he reaches out across time and space to find heroes and warriors that will help fight back against Set’s followers. As Conan, Solomon, Agnes, and Moon Knight battle Set’s followers across time, they’re then brought together to help fight Set and his minions together. But with no knowledge of one another, how are they ever supposed to truly work together?

That’s an issue that will probably be addressed in future issues of the event, but for now, Jim Zub’s script seems fully content to just introduce these various Howard creations and then get to the plot later. That’s all well and good, but there’s very little here to really get us to understand Set’s motivations and why he’s an important enemy. There’s also no real reason for Moon Knight to be here, other than the fact that he doesn’t have an ongoing series at the moment.

Scott Eaton’s art is pretty much in line with the art we’ve seen in Marvel’s other Conan titles, but it’s definitely not going to make you rethink who should be drawing the main Conan books anytime soon. Eaton’s able to handle the different characters and their realms well, but again, this is very reliable artwork that’s not trying to do anything too crazy with the characters and themes in the book.

Conan: Serpent War is a very strange Marvel mini-event, but I wanted to give it a fair shake. But now that I’ve read it, I’m still not sure what to think of it. As an excuse to put a bunch of Robert E Howard’s creations together, it’s fine. As an introduction to Solomon Kane and Dark Agnes, it’s too limited. And as a way to get Moon Knight back into his own series, it’s baffling. Time will tell how Serpent War shakes out, but as of right now it’s a weird start to an even weirder event.