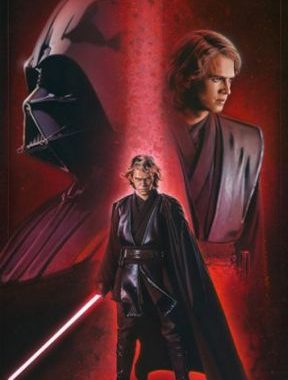 “Ode To A Skywalker”

As I type this, I’m rewatching Attack Of The Clones, the worst Star Wars movie, and the one that features a character I legitimately like in the franchise who was treated the worst possible way: Anakin Skywalker.

Yes, he’s whiny, annoying, bratty, badly acted, and kind of ruins the mystique of Darth Vader (okay, there’s no kind of, he does), but there’s something about the character that I’ve always liked. I’ve always been intrigued by the “fall to villainy” story trope, but it’s extremely lacking in the Star Wars Prequels, which is a really big problem since it’s the main story of those films. Honestly, I think the Anakin stories in my imagination (and the spin off comics and books featuring him) are far more interesting than the official story we got, and it’s very difficult to not watch the Prequels and think about the ways George Lucas could have improved the story.

In rewatching Phantom Menace, there’s multiple lines where Anakin mentions that he wants to be a Jedi, and that if he became one, he’d free his mother and the other slaves in the galaxy. This line is something that Qui-Gon Jinn kinda dismisses by not mentioning it, and is never addressed until Anakin’s mother is murdered in Attack of the Clones, which then leads to Anakin’s massacre of the Tusken Raiders and his declaration that he will become “the most powerful Jedi that has ever lived” (a great scene in a bad movie that shows the kind of thing that Lucas should have been aiming for).

I hate playing the “I wish this fictional thing was done the way I wanted it” card, but when it comes to the Prequel Trilogy, there’s a whole lot of things that should have been done way differently. For starters, the focus of Anakin’s turn to the dark side should have been focused primarily on his relationship with his mother. Imagine if Phantom Menace was done like a mirror to A New Hope, and followed Anakin on Tatooine like the first movie followed Luke. We’d see him living with his mother as a slave, and then he meets Qui-Gon and is whisked away to the life of a hero….until circumstances lead him to take a villain’s journey instead of a hero’s.

At every chance, Anakin is told that the Jedi cannot interfere on Tatooine and that his mother cannot be saved along with her fellow slaves. As he gets older and more experienced in the Jedi teachings, he continues to push back against that idea, until it’s too late and his mother is dead. Then when Padme’s death is hinted at in Revenge of the Sith, his resentment towards his colleagues grows as he knows how futile it is to get his fellow Jedi to help him, causing Palpatine to enter the picture with promises to help prevent another tragedy in Anakin’s life.

At the very least, playing up Anakin’s relationship with his mother would make the audience side with him a little more, or at least understand his decisions better. Hell, it would even cause the audience to cast doubt on some of the rulings of the Jedi, and could even hammer home the idea of them causing their downfall even more (it would even be a little interesting to have some Jedi side with Anakin, causing a mini civil war). Adding a little bit of grey to the black and white world of Star Wars does seem pretty counter to the franchise as a whole, but I think it’s necessary to really make Anakin’s turn more believable. Having Anakin become disenfranchised with a group who was supposed to help him would make his turn something that a lot of people could relate to. Heartbroken over his wife’s death (or impending death) and the loss of the only people he considered friends, he’d be a prime candidate to be turned to the Dark Side by Palpatine.

I doubt that these changes would really make that much of a difference in the overall quality of the Prequels, but it’s tough not to imagine that they wouldn’t. I know the Prequels have their fans ( a lot of them are younger than me), and that’s one of the cool things about Star Wars, everyone has their trilogy. But it’s hard not to watch the entire saga and notice a major dip in quality around the Prequel era, and a lot of little things could have been done to make them stronger. Plus, it would tie into Lucas’ musings about the trilogies being “like poetry, they rhyme”, but would enhance that idea if the Prequels really leaned into being the mirror version of Luke’s story from the original trilogy.

But, we’re stuck with the movies we’ve got, and unless Disney wants to reboot the Prequels at some point, I guess I’m just going to have to stick with the Anakin story in my head that plays in between the scenes of the movies.

What is Jetpack Comics?
It's a shop run for and by gamers and comic enthusiasts! No matter what you may have heard (it's probably true), you'll be happy to visit us! We're a whole lot of fun and a whole lot of shop! Jetpack Comics is more than just a comic and games store, it's an experience
Contact Us
Phone: (603) 330-XMEN
Email: jetpackcomics@gmail.com
Address: 37 North Main St.
Rochester, NH 03867
Follow Us
Copyright 2022 - Terms and Conditions
Cart
Back To Top
Search