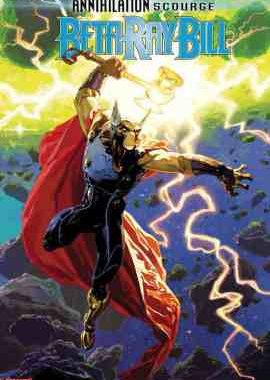 The new Annihilation event continues to barrel its way through the Marvel universe, and now it’s coming for Beta Ray Bill. Easily the most exciting and intense of the Scourge specials, Annihilation Scourge: Beta Ray Bill is the highlight of the event so far, and Michael Moreci and Alberto Jimenez Albuquerque’s special should absolutely lead to an ongoing for the Norse Horse.

The Sentry and his Revengers are still tearing their way across the universe, and they’ve come for the Inhumans, who are already decimated but have the mighty Beta Ray Bill as their protector. However, even the might of Stormbreaker isn’t enough to repel the Sentry and his men, and the battle quickly takes a dark turn for Bill, leaving him literally powerless to stop them.

Michael Moreci has made a big name for himself on indie titles like Wasted Space and Roche Limit, but he’s never written a Marvel comic before now. Well, he definitely proves his worth with this issue, and makes a strong case for writing more titles for the publisher. Beta Ray Bill packs a lot of punch in it’s regularly sized pages, and it’s easy to see that Moreci is having a blast writing this special. I’m really looking forward to more from Moreci.

Alberto Jimenez Albuquerque’s art adds to the epic nature of Moreci’s script. Full of splash pages of huge battles and insane space armies, Albuquerque seems to be treating this as the big break to get into more Marvel titles, and like Moreci, that’s something I really want to see. Albuquerque’s work shows a clear focus and great line work that we don’t see in many comics these days.

While some of the Annihilation Scourge specials have been alright, Beta Ray Bill is the first one that not only moves the plot of the event forward, but could also be used to jump start a new series for the character, something I’ve always been down for. Whether you’re following the Scourge line or not, Beta Ray Bill is a comic you won’t want to miss.