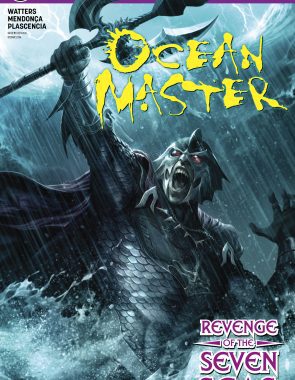 Despite being the main villain in a big movie last year, Ocean Master hasn’t been around much in the comics. After the big “Drowned Earth” storyline in Justice League last year, Orm has laid low under the waves. But now that DC’s deemed 2019 as “Year of the Villain”, it’s time for ol’ Orm to reemerge from the depths with a pretty solid standalone story from Dan Watters and Miguel Mendoca.

Serving as both a recap and a standalone adventure, Ocean Master finds Orm visiting the home of the surface woman he left behind to fight for Atlantis again. Detailing his adventure with a new kingdom of Atlantis’ cast outs, Orm attempts to convince his former lover to leave the surface world behind and join him as a Queen under the waves, but is rebuked by her offer.

Orm comes off like an underwater Magneto in this issue, which is a pretty great take on the character, to be honest. Dan Watters’ script, while wordy at times, is still tight and packed with a bunch of story that a lot of these other specials could stand to have. Watters gives Orm nobility, but also keeps the character a little villainous to add to his ambiguity for the reader.

Miguel Mendoca’s art is a great addition to Watters’ script, and he does a fantastic job of bringing the world of Atlantis to life. While there are a few strange designs for some of the creatures and other atlantean characters, Mendoca’s art is really great and full of fantastic little details to really make the world of Ocean Master come to life.

The various Year of the Villain one shots specials have been a bit of a mixed bag, but Ocean Master is definitely one of the best ones to come out of the entire publishing line. While he may not be as popular as Lex Luthor, Joker, or even Black Manta, Watters and Mendoca’s special does a lot to make Ocean Master a legitimate threat, and I’m hoping we get to see more of him as the Year of the Villain continues.