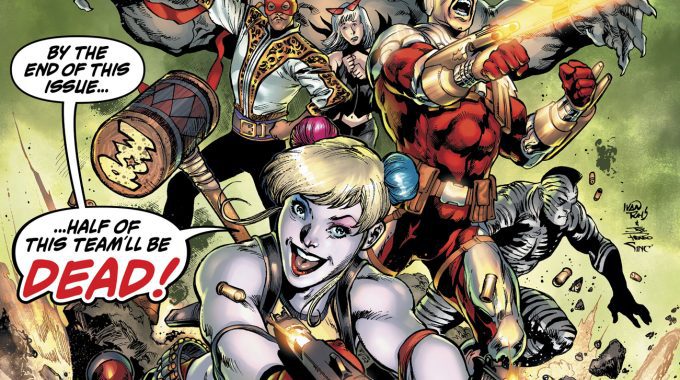 Despite starring in an (inexplicably) hit film, the Suicide Squad hasn’t had the best success as a comic in recent years. Sure, they’ve had good creative teams, but after a few issues it seems they keep losing the hot creative team, and then the series suffers. I have high hopes for the latest attempt at reviving the Squad, mainly because it features one of my favorite writers, Tom Taylor, scripting the series. Teamed with artist Bruno Redondo, Suicide Squad #1 is a fast, violent, and fun introduction (or reintroduction) to DC’s most dysfunctional team, and it should have a long tenure ahead of it.

As a small group of super-powered freedom fighters take aim at the United States, Amanda Waller and a new colleague reassemble Task Force X. Made up of mainstays like Shark, Deadshot and Harley Quinn, the rest of the team is decidedly lacking, as Zebra Man, Magpie, and The Cavalier were the only other criminals in captivity that they could acquire at short notice. But this “worst Suicide Squad” ever team is playing right into their new handler’s plans, and he has plans to use Task Force X to shape the world in his image.

Tom Taylor’s gifts as a writer stem from his great sense of character, and that’s put to great use with Suicide Squad. Able to bounce between a variety of voices, Taylor’s script puts the focus on almost every character on this team, something that many other Suicide Squad writers neglected to do. Many times they’d focus on Harley or Deadshot cause they’re the “leads” but it’s always a little disappointing when you have minor characters on the team that could stand to be in the limelight a little. Taylor knows that there’s no fans of The Cavalier out there, but that doesn’t mean that he doesn’t give the character some fun moments, and it really makes this version of the team stand out from others.

Bruno Redondo’s style is what I’d call the “stock DC style”, but I want to make sure that’s not a knock against him. His style is really clean and well done, and brings the shockingly violent moments in this book to brutal life. To be completely honest, I’m shocked that this issue is able to get away with the things it gets away with, because this book is BRUTAL. Redondo’s definitely going to get some more work with this series, and he could not deserve it more
The Suicide Squad has a lot of fans, and they definitely deserve a book like Suicide Squad #1. In a lot of ways, it gives you everything you’d want from a Suicide Squad book: it’s funny, action-packed, and super violent. Another notch in Tom Taylor’s belt, it’s definitely the best the team has been in a while, and looks to be a pretty good run for the team.