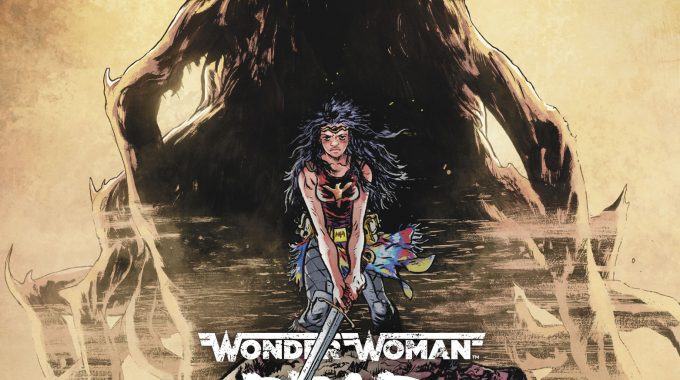 DC’s Black Label is a pretty well covered in these reviews, and for good reason. By and large, the publisher’s plan to take their established characters and give different creative teams free reign has worked wonders, creating some truly fresh and dynamic takes on legendary characters. With Wonder Woman: Dead Earth, Extremity and Murder Falcon creator Daniel Warren Johnson gets to play in the DC world, and the results are nothing short of spectacular.

Waking up in a post-apocalypse, Diana of Themyscira  is quickly thrown into a battle for survival. As she traverses the bombed out world that she loves, she’s brought before the new rulers of humanity and placed into a battle to the death. But soon the world and the remaining heroes need her help, and Diana decides to help the last shreds of humanity in a world that cannot survive without her.

Daniel Warren Johnson’s script has shades of Extremity and Murder Falcon, but the really impressive thing about it is how much it humanizes Wonder Woman. Wonder Woman is so iconic that sometimes it’s hard to remember the more human elements of her character, and Johnson makes sure to remind us of these aspects of her, even though he gives us plenty of moments where Diana is kicking ass and taking names.

Johnson’s skills as an artist are just as well-known, if not more so, than his work as a writer, and Dead Earth is a stunning showcase for that. Simply put, no one draws action sequences like he does, and for those getting their first taste of Johnson’s art with Dead Earth, they’re going to be completely blown away. Hell, I’ve been a fan of Johnson’s since Extremity and I still find myself completely blown away by his art on a regular basis.

Wonder Woman: Dead Earth is another solid and must-buy entry in the DC Black Label imprint, and it stands as another landmark work for Daniel Warren Johnson. A perfect mix of Johnson’s sensibilities with the world of DC, Dead Earth is one of the best comics of this year, and needs to be read by anyone who appreciates the comic book art form.

Killswitch #1 (Action Lab) A futuristic spin on The Fugitive, Killswitch follows a renegade…

Captain Marvel #1(Marvel Comics) You may or may not know, but Ms. Carol Danvers has…

OPEN DAILY FOR IN-STORE VISITS, WITH RESTRICTIONS, AND CURBSIDE PICK UP.
THE GAME ROOM IS CURRENTLY CLOSED TO ANY GAME PLAY ACTIVITY.

WANT TO VISIT THE SALE ROOM, OR SORT THROUGH SINGLE CARDS?
There is a $1 fee for gloves. Our gloves are required. Restroom is not available at this time.