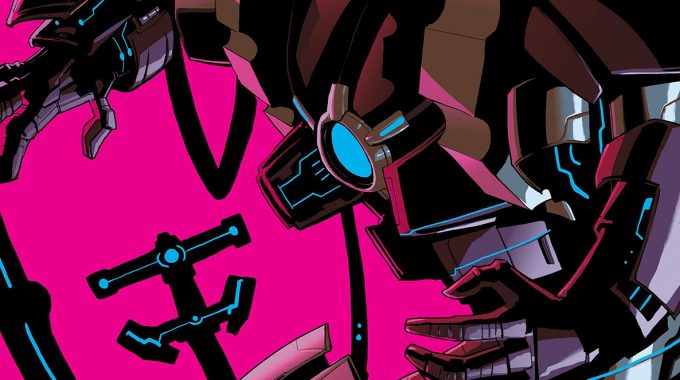 We’re officially in the future year of 2020, and that means that the Iron Man of 2020, long thought of a as a far away villain, is now a modern day threat. Or is he? That’s the main crux of Dan Slott, Christos Gage, and Pete Woods’ Iron Man 2020 #1, which finds Arno Stark, not Tony, in the Iron Man armor of the future, taking down the threats that could potentially lead to the destruction of the world around him.

Tony’s brother Arno is in the Iron Man armor now, and he believes the world is going to end. While he’s not sure how, he feels it coming, and he’s going to stop it before it happens. That means taking out any and all threats in the world of tech, even if that technology hasn’t even done anything yet to threaten the world. Naturally people aren’t prepared for this new Iron Man, and when a new Tony Stark arrives powered entirely by AI, it only means more problems are in store for Arno Stark.

I’ll be honest, I haven’t kept up with Dan Slott’s run on Iron Man prior to this, and that was probably a mistake on my part, as this issue wasn’t all that new reader friendly. While I’m aware of the Arno Stark character, I haven’t read anything at all that really focused on him, so having him as the main character of this series was a bit of a reach, and I can’t say that I find him all that interesting.

Pete Woods’ is a reliable artist for Marvel, and that doesn’t change with Iron Man 2020. There’s nothing really all that spectacular about his art, but it gets the job done and has some pretty neat panels and layouts. Woods is definitely the type of artist who’s put on books cause he can turn out pages at a pretty quick pace, and that’s most definitely the case with Iron Man 2020.

If Dan Slott and Christos Gage had done a little more work to make this issue more new reader friendly I’d probably think a little higher of it, but when your book has a “#1” on it, you kind of expect it to have something to catch new readers up to speed. As it stands right now, those that have been following the Iron Avenger’s exploits up until now will probably find some cool stuff in this issue, but those of us who haven’t been following it will be pretty lost.