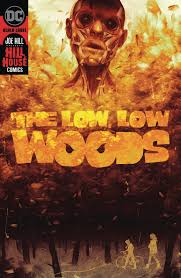 The Low, Low Woods is the latest of the Hill House comics, and it’s first issue set up a pretty intriguing mystery for what happened in the movie theater with El and Octavia. Unfortunatley, that mystery is stretched out a little too far with Carmen Maria Marchado and Dani’s second issue, which spends a lot of time building up the mood and atmosphere that was already established, and not enough time expanding on the plot.

Much of Marchado’s second issue script is spent going over the events of what happened in the first issue, and the relationship between El and Octavia in the movie theater. While both teens are experiencing the fallout of their “adventure” differently, they both can’t deny that it’s strange that both of them are experiencing missing memories. While Marchado’s script is doing a great job with the atmosphere of the series, the fact that we’re still kind of dancing around the mystery is more than a little annoying, especially when there isn’t that much left for this six issue miniseries.

Dani’s art has a very rough look to it that works well with establishing tone, but not so well when it comes to figure work. There’s a very rushed quality to the art in this issue, and I’m not convinced that it was intentional. Of course, this type of book suits Dani much better than a superhero book but at the same time, this doesn’t feel like the artist’s best work.
The Low, Low Woods is probably the weakest of the Hill House books in my opinion, but it does add to the diversity of the imprint. Whether or not the creative team can get the book back on track in the remaining four issue is still up to debate, but at least there’s something else in the Hill House line for people looking for it.