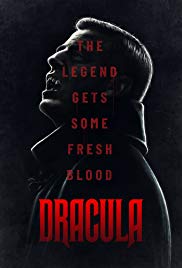 As someone who owns about five different versions of Bram Stoker’s famous novel, I approach new adaptations of Dracula with a sense of cautious optimism. For every Universal Studios or Bram Stoker’s Dracula, there’s a Dracula 2000 or Dracula Untold that attempts to update the famous gothic horror novel and fails spectacularly. The latest attempt from Stephen Moffat and Mark Gatiss, the creative minds behind the BBC smash Sherlock, initially made me pretty intrigued, though not without some reservations, as the pair’s track record is fairly spotty as of late. But even with those misguided past few series of Sherlock, everything I’ve seen surrounding the project made it seem like the adaptation I’ve been waiting for.

It wasn’t. But it was still a pretty interesting new spin on the story of the Count.

Broken up into three ninety minute episodes, Dracula essentially tells the story of Bram Stoker’s novel, albiet with some very intriguing twists to the classic tale. The first details Jonathan Harker’s arrival at Castle Dracula; the second, Dracula’s voyage to London aboard the Demeter; and the final (and weirdest) episode follows Dracula as he arrives in London and begins his reign of terror. All three use the spine of their respective sections of the novel to craft a unique spin on the story, and in doing so, feel like a mini Dracula trilogy of sorts. Honestly, you could watch any of the three on their own and get a satisfying Dracula story, but the three work together to tell a new “modern” spin on the Count’s story that is both outside of the box when it comes to adapting the story, but also tries to address the themes of Stoker’s novel. To go into greater detail for each part would really spoil the fun, so you should really go into this as cold as possible (or at least with a summary of the novel from wikipedia if you don’t have time to read the original text).

Honestly, the one aspect that makes this new interpretation stand out is the Count himself. Played by Danish actor Claes Bang, this Dracula has more in common with the Bela Legosi and Gary Oldman versions than any others. Bang plays his Count as this seductive animal, and he bounces from charming to menacing within seconds. It’s easy to see how his victims could fall sway to his power, and Bang is clearly having a lot of fun in the role. I’ve seen a LOT of live-action Draculas, and Bang’s is easily one of my new favorites. There are shades of Legosi, Langella, Oldman, and even Christopher Lee in this Dracula, but Bang also makes sure to add his own unique, devilish spin on the Count. The new twist where Dracula takes on some of the personalities and traits of his victims is an interesting addition to the character, and works as a great way for the Count to get “up to speed” on the world around him quickly. It’s also refreshing having a Count Dracula that is just evil. He’s not lovelorn, nor a failed tragic hero like the Untold Dracula. Bang’s Dracula is just an overly dark and evil Prince of Darkness, who also happens to be incredibly darkly funny as well, with great chemistry opposite his many adversaries in this series, most notably the new take on Van Helsing, which is one of the more ingenious twists that Moffat and Gatiss add to this story.

Unlike Sherlock, I wouldn’t recommend this for younger viewers. Even though it carries a TV-14 rating, there’s a ton of blood and some extremely creepy visuals throughout that I loved, but could definitely freak out the easily squeamish viewer. Of the three episodes, my favorite was easily the second chapter, but even with each episode clocking in at feature film length, there seems to be a lot missing from this interpretation of Dracula, though that could be that I simply wanted more episodes as well. Moffat and Gatiss have so many ideas with this new version at the story that at times you wish they would slow down and let some of these ideas breathe, especially in the third episode, which is already proving to be divisive amongst viewers (I thought it was a pretty daring new way to tell the London portion of the story, although it would have served better to tell this portion of the story as an entire series than a single episode). However, Gatiss and Moffat took a big swing with this adaptation, and I’d easily watch another take on this world of Dracula than another franchise non-starter like Dracula Untold any day of the week.