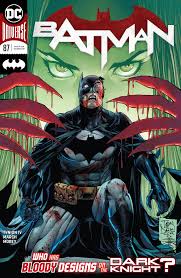 James Tynion IV’s first issue as the new installed Batman writer was a pretty “safe bet” for the publisher, but with his latest issue, featuring art by Guillem March, starts to bring the rest of the run into clearer focus. Now that the status quo has been firmly established, there’s a great sense of what Tynion’s run will be about, and to be honest, it’s pretty solid.

After taking out the assembled assassins in the previous issue, Batman has to figure out who was behind this coordinated attack, and why they want to kill Bruce Wayne. After discovering that Cheshire isn’t actually behind bars, but just a clay dummy created by Clayface, Batman takes off on a thrilling high speed chase to take on the assassin, all the while The Riddler is trying to assemble his own group of allies to also figure out who hired the assassins.

Simply put, this issue is a lot better than the previous one. Tynion’s script ramps up the action and excitement several notches, and crafts a pretty tight series of action set pieces that don’t let up at all. While we don’t have that many more clues behind who hired these assassins, it honestly doesn’t bother me that much because the script is so great.

Having Guillem March take over from Tony S Daniel might seem like a downgrade at first, but March’s art is simply stunning in this issue. There are times where he sometimes seems to rush his pages, but March’s work in this issue is the best it’s been in a very long time. It’s extremely difficult to effectively depict chase sequences in a comic, but March’s art is full of fluidity and motion that makes it seem like Batman is practically leaping off the page. It’s a great surprise.

I’m thankful that it only took an issue for Tynion IV’s script to start picking up steam, and now that the mystery is in full swing, I’m very excited to see where it goes from here. It’s still a bummer that Tom King wasn’t allowed to get to issue 100 for Batman, but this is a pretty good consolation prize.