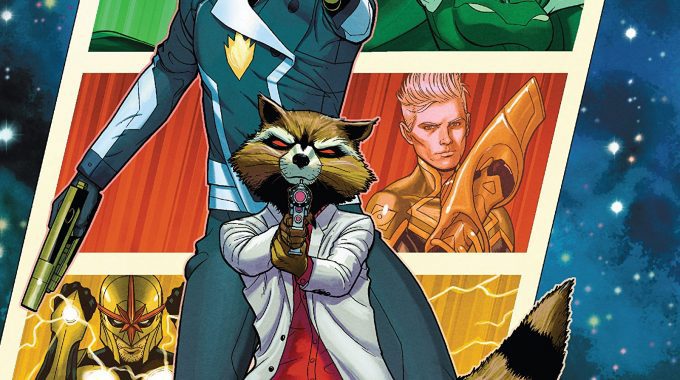 You can’t keep the Guardians of the Galaxy down, and that’s pretty apparent with the comic side of the team, which has another new #1 (their fourth by my count) that has a new creative team, a new roster of heroes, and a new threat. The Al Ewing and Juann Cabal series is intending to be just as grand and epic as the previous run from Donny Cates, but as it stands right now, it’s simply too soon to get all that excited about another crack on the team that will probably be rebooted in about twenty issues.

Star-Lord, Gamora, Rocket, Groot, and Drax are attempting to enjoy some much deserved R&R after their previous adventure, and unfortunately for them, the vacation is pretty short lived. After a visit from Nova, the team learns that the ancient Greek gods of myth have been reborn and are threatening all known reality. Despite agreeing with their teammates to stay out of the conflict, Star-Lord and Rocket secretly break off to help Nova against the threat, but that mission quickly goes South as the makeshift team assembled by Nova finds themselves way over their heads. But can the surprise arrival of Hercules help turn the tide?

It’s certainly a crazy start for a new spin on the Guardians of the Galaxy, but unfortunately Al Ewing’s tale comes hot on the heels of Donny Cates’ run. There’s less than a month of time between that ending and this new start, and while Ewing’s script is very easy to jump into for newbies, it lacks the balls to the walls craziness of Cates’ run, which is a shocking thing to say after I just explained what happened in this issue. Despite this, Ewing’s script is really well done, and he has a good handle on the characters , even if we only really focus on Star-Lord and Rocket Raccoon.

Juann Cabal’s art is a extremely solid, and honestly, if you were going to pick this up for any reason, it’s his art. Cabal gets to go all out with this issue, delivering some pretty great panels that try to help reach Ewing’s goal of making this an epic start to this new series. I have no idea how long Cabal will be on this series, but it’ll look pretty damn good for the time being.

It’s hard not to feel bad for Ewing and Cabal with starting this new series. It’s difficult for any creative team to step in after a stellar run has concluded on a book, so I can’t imagine what it’s like to have to follow up someone with such a rock solid run of titles like Donny Cates. While this opening issue isn’t going to make you forget about the previous run on Guardians, there’s a chance that maybe, just maybe, Ewing and Cabal could make this stand on their own.