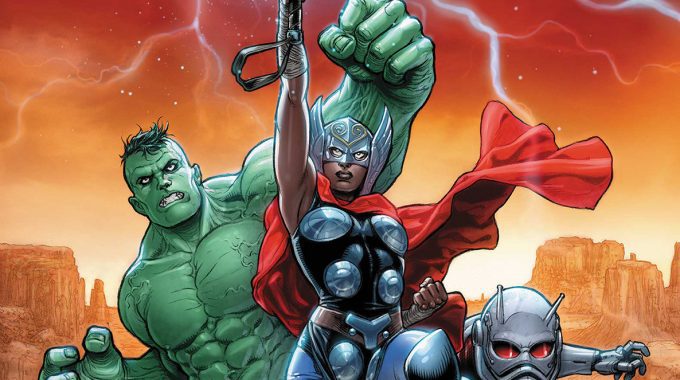 Dead Man Logan was a surprising success for Marvel, bleeding even more blood from the Old Man Logan stone that spawned a hit Wolverine story, spin offs, and even a movie adaptation. From that comes Avengers of the Wastelands, a new miniseries that picks up two years after the events of the Dead Man Logan miniseries, and features returning writer Ed Brisson and new artist Jonas Scharf.

The future of the Marvel Universe is still very bleak following the death of Logan, and even through Dani Cage is the new God of Thunder, and the son of Bruce Banner is in her care, the world is still under the control of some very evil men. When Dani’s friend Dwight arrives with news that Doctor Doom has been attacking random settlements, Dani knows that it’s up to her and the spawn of Bruce Banner to set things right. But with a world that is constantly against them, how can they truly make a difference? That all depends on a certain Avenger that makes a surprising appearance at the end of the book.

Ed Brisson’s script does a fantastic job of both picking up where Dead Man Logan left off and serving as a new jumping on point for new readers. The nods to the previous series are done in a way that won’t confuse new readers, and those of us that read the Dead Man Logan miniseries will find a fun continuation of that world within these pages. It’s really cool seeing Brisson let loose with this potential future of the Marvel universe, and that creativity should bleed through to the other issues of this miniseries.

I’ve never seen Jonas Scharf’s art prior to this issue, but I have to say, he’s got the goods. While his art is a little more on the cartoony side than I was anticipating, Scharf is able to convey the wide variety of emotions that this issue needs, and he has a great sense of scope with his art. Even the more subtle moments where Doctor Doom confronts a lone Ultron robot are handled extremely well under Scharf’s pencils.

I wasn’t sold on the idea of furthering the Old Man Logan universe when I first heard about Avengers of the Wastelands, but I have to admit that this opening issue is pretty solid.  Ed Brisson and Jonas Scharf have crafted an issue that serves as a cool continuation of Dead Man Logan and a brand new story for people interested in a post-apocalyptic Marvel Universe, which makes this issue the definition of a slam-dunk comic.