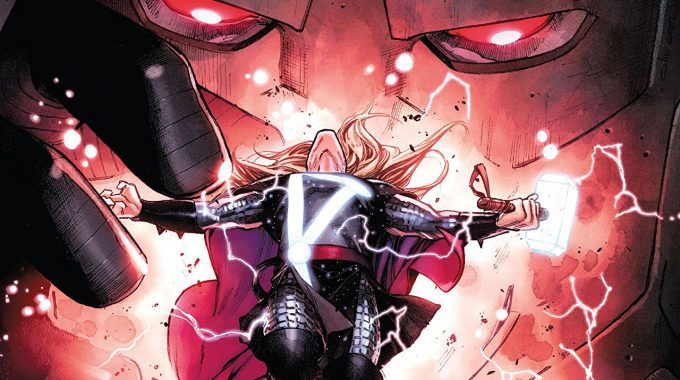 Just when I thought Donny Cates couldn’t get any crazier, along comes Thor #2. The second issue in the rising star’s run on the God of Thunder has artist Nic Klein still along for the ride, and man oh man is it a huge adrenaline rush of comic.

Picking up immediately after the events of the first issue, Thor is now both the King of Asgard and the new Herald of Galactus. Scouring the cosmos for planets that will allow Galactus to become powerful enough to take on the oncoming Black Winter, the God of Thunder doesn’t exactly agree with Galactus’ methods of eating, leading to an inevitable confrontation between the two. But as Galactus and Thor battle it out, the Black Winter draws nearer, and an old ally of Thor’s has come to do battle with Galactus!

Simply put, this is another fantastic issue from Donny Cates. The sheer creativity on display in this issue is astounding, and shows that Cates truly has no bounds when it comes to insane ideas for this stories. Each page of Cates’ script is brimming with fantastic ideas, and I can’t wait to see what comes up next from Cates’ mind.

Nic Klein’s art is also spectacular, with some pages that will simply blow your mind. Numerous panels depicting Galactus and Thor’s fight made my jaw drop, and this book is really going to put Klein on the map. Klein’s really giving it his all with the art on this book, and it shines through on every page.

Thor is fast becoming one of Marvel’s strongest new titles, and the simple fact behind that is that it’s being spearheaded by Donny Cates. Brimming with creativity, Thor is a new series that will make even the most jaded Marvel fans stand up and take notice of its fantastic ideas. If all goes right, Marvel will keep Cates as an exclusive writer and never let him go.