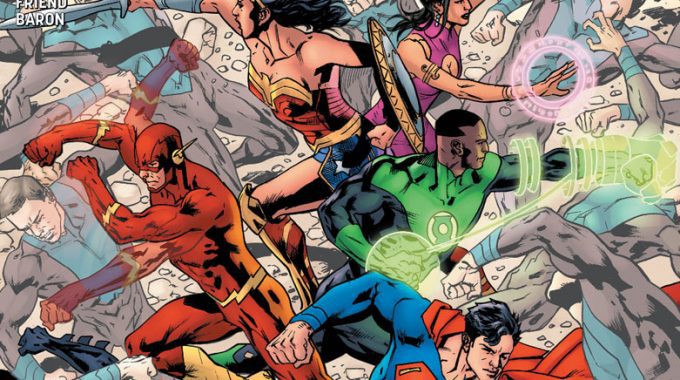 Now that Scott Snyder has left the title, it’s time for a new creative team to take Batman, Superman, Wonder Woman, and the rest of the Justice League into a new adventure. After a lengthy run that involved “The Totality”, the Legion of Doom, and metaphysical, universe-shaking threats, I was ready for something a little more “normal” from a Justice League comic, and Robert Venditti and Doug Mahnke’s Justice League #40 definitely fits that bill.

Former Green Lantern Sodam Yat crashes to Earth with a dire warning: The Eradicator is coming, and he’s bringing with him an entire army to “cleanse” the Earth. This leads Superman and the other members of the League scrambling to prepare for war with one of the Man of Steel’s most dangerous enemies, and looking for any weaknesses that they can use against a being that’s just as powerful as Superman, but with no limits. This leads Batman to consult Madame Xanadu in hopes of her magical abilities being able to be used against Eradicator. But as Batman attempts to convince the Sorceress, the Eradicator makes his arrival on Earth, and it may already be too late to stop him.

Despite the fact that this issue doesn’t pick up on the cliffhanger ending of Scott Snyder’s run, Robert Venditti’s script does all of the thins you’d want a Justice League comic to do: sets up a world-ending threat, has the team work together to solve, and has great characterizations of the characters. While some members of the team are sidelined more than others, Venditti’s takes on all of the core members is fantastic, and the plot seems to put the team and Superman on edge, which is an interesting place to leave the characters.

Doug Mahnke is one DC’s top talents for art, and Justice League #39 is absolutely the kind of book he should be on. Mahnke is known for detailed, over the top art, and he delivers in spades with this issue, depicting the heroes as the icons they should be. I’m already a fan of his, so I’m not going to waste time gushing, but I can’t wait to see what the rest of this run looks like with him on art duties.